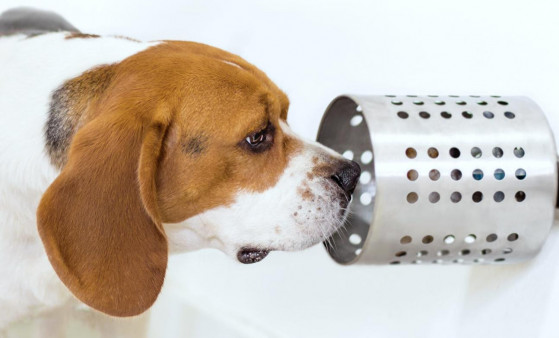 A new study has shown that dogs can use their highly evolved sense of smell to pick out blood samples from people with cancer with almost 97 percent accuracy. Courtesy of BioScentDx

The results could lead to new noninvasive cancer screening approaches.

It’s no secret that dogs have a great sense of smell. After all, humans rely on to detect everything from bombs and drugs to missing people, food sources, pesky insects and more. Now, a new study has found that dogs can detect certain types of cancer with nearly 97 percent accuracy!

Presented at the 2019 Experimental Biology meeting last week, the study suggests that dogs’ highly evolved sense of smell could one day lead to cancer screening approaches that are less expensive and less invasive than existing methods. Doing so could potentially save thousands of lives and change the way cancer is treated, according to the researchers.

Researchers at Florida-based BioScentDx, a research firm that is training dogs to detect cancer, used the animal training method known as clicker training to teach four beagles to distinguish between normal blood serum and samples from patients with a malignant form of lung cancer. Of the four dogs, one refused to perform. However, the remaining three dogs were able to correctly identify lung cancer samples 96.7 percent of the time and normal samples 97.5 percent of the time post-training.

“This work is very exciting because it paves the way for further research along two paths, both of which could lead to new cancer-detection tools,” said Heather Junqueira, , BioScentDX cofounder the study’s lead researcher. “One is using canine scent detection as a screening method for cancers, and the other would be to determine the biologic compounds the dogs detect and then design cancer-screening tests based on those compounds.”

Moving forward, the firm plans to develop a new noninvasive screening method for cancer and other life-threatening diseases using other trained canines. In fact, the company has already launched a breast cancer study in which participants donate samples of their breath for screening.

To learn more about dogs and cancer research, click here.