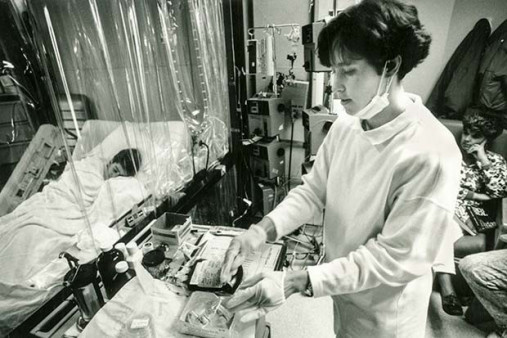 Fred Hutch’s development of bone marrow transplantation offered the first definitive and reproducible proof that the human immune system can cure cancer. This photo was taken in the Fred Hutch transplantation clinic in the 1980s. Courtesy of Fred Hutch

Forty years ago this month, a team of scientists at Fred Hutchinson Cancer Research Center published the first unequivocal report in humans that immune cells called T cells have the power to cure cancer.

The finding, published in 1979 in the New England Journal of Medicine, emerged from patients who’d received a bone marrow transplant from the Hutch’s pioneering transplant team. They found that the donated bone marrow cells did not simply rescue patients from the high doses of radiation and chemotherapy they’d received to kill their cancer. Instead it was, in fact, those donor immune cells that were key to the potential cure.

The report opened the door to new protocols that made transplantation an option for many more patients. It also kickstarted the now-hot field of immunotherapy (also known as immune-oncology) — treatments that harness the body’s own disease-fighting T cells to fight cancer.

What the landmark paper revealed

In 1979, bone marrow transplantation was still considered a radical procedure. Physician-scientists would wipe out a patient’s leukemia-filled blood and marrow with massive doses of chemotherapy and radiation and then rescue the patient with an infusion of healthy new marrow cells from a donor.

The patients’ diseases were incurable — supposedly. But under team leader E. Donnall Thomas, MD, who later won a Nobel Prize for transplantation, the Hutch scientists refined the procedure throughout the 1970s and more recipients survived.

With the largest numbers of transplanted patients in the world — and the assistance of then-cutting-edge statistics contributed by the Hutch’s Ross Prentice, PhD — the Hutch team found that survival depended on whether the patient experienced graft-vs.-host disease, or GVHD, a potentially life-threatening complication in which donor T cells recognize the patient’s healthy cells as foreign and attack them.

The result stimulated years of work aimed at curing patients with cancer and other diseases by safely harnessing the so-called “graft-vs.-tumor effect.”

Hutch faculty member Rainer Storb, MD, who was the senior scientist on the 1979 report, and colleagues went one direction with their discovery: They developed gentler, outpatient transplant protocols that harness adverse GVHD reactions and rely on the donor’s T cells to wipe out cancer cells, rather than on high doses of chemo or radiation. Called “mini-transplant,” these protocols are now used worldwide to treat infirm patients and those as old as 80, who are more likely to develop blood cancers but less likely than younger, stronger patients to survive the harsh traditional transplant methods.

Other scientists, including colleagues at Fred Hutch, took the finding another direction: Starting in the 1990s, Hutch scientists began to publish a series of first-of-their-kind studies demonstrating the potential to grow, select and even genetically modify T cells themselves as therapies for patients with cancer. Researchers around the world contributed other pivotal discoveries. Today, T-cell therapies have produced unprecedented remission rates for some patients, two T-cell therapies are Food and Drug Administration–approved for patients with certain severe blood cancers, and new generations of these immunotherapies with more applications are being developed at the Hutch and beyond.

A series of systematic experiments

“I did realize right away that it would have broad implications,” said Storb about the team’s historic finding. Others did too: Storb remembers that the paper made a splash in May 1979 when it first came out. A search of scholarly databases shows that it has been cited over 1,600 times, including more than a dozen times in the first five months of this year.

“Looking back at everything we’ve accomplished in the last five decades, I’m actually not really surprised at where we are now. It was 50 years of systematic experiments to move the field forward,” Storb said.

This article was originally published on May 21, 2019, by Hutch News. It is republished with permission.