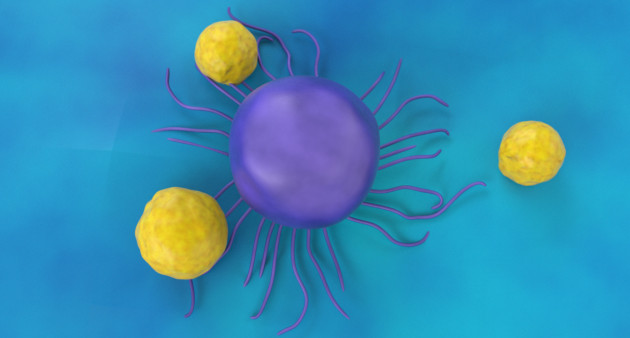 Genentech previewed the results from the Phase III Impassion130 trial in a July press release. Full details of the study were published last week in The New England Journal of Medicine.

The study showed that the median progression-free survival, meaning patients were still alive without worsening of disease, was 7.2 months for those assigned to Tecentriq versus 5.5 months for those who received a placebo. Overall survival was longer in the Tecentriq group, but this finding is still preliminary. Most or all of the benefit appeared to be driven by good results in the subgroup with PD-L1 positive tumors, meaning they have a biomarker associated with better response.

Breast cancer is classified by the type of receptors it expresses. A majority of breast cancers carry estrogen hormone receptors and treatment usually includes hormone-blocking drugs. Other tumors express HER2 (human epidermal growth factor receptor 2) and can be treated with HER2 inhibitors. Triple-negative breast cancer (TNBC) doesn’t express any of these receptors and is more difficult to treat. Accounting for around 15 percent of all breast cancers, TNBC tends to be more aggressive—with a life expectancy of about a year and a half for metastatic disease—and is more likely to strike younger women.

Tecentriq is a monoclonal antibody that blocks the PD-L1 protein on cancer cells or immune cells inside tumors. PD-1 is an immune checkpoint, a receptor on T cells that plays a role in regulating immune function. Some tumors can hijack PD-1 to turn off immune responses against them. Drugs that block the interaction between PD-1 and PD-L1, its binding partner, can release the brakes and restore T-cell activity. People with higher PD-L1 levels in their tumors tend to do better, but this is not a reliable predictor of individual response.

This type of immunotherapy works only for a minority of patients. Checkpoint inhibitors work best against so-called hot tumors, such as melanoma, that have many mutations to attract T cells. To date, checkpoint inhibitors have not demonstrated much activity against breast cancer—considered a cold tumor—but combining them with chemotherapy shows greater promise.

IMpassion130 enrolled 902 participants with TNBC in 41 countries. Almost all were women and the median age was about 55. They had either locally advanced disease that could not be surgically removed or metastatic cancer that had spread elsewhere in the body, most often the lungs, bones or liver. They had not been treated with systemic therapy for advanced cancer, but two thirds had previously received neoadjuvant or adjuvant treatment before or after surgery. Just over 40 percent were classified as PD-L1 positive, meaning at least 1 percent of immune cells in their tumors carried the PD-L1 protein.

Study participants were randomly assigned to receive IV infusions of Tecentriq or placebo on days 1 and 15 of a monthly cycle, in combination with Abraxane, an albumin-bound formulation of the widely used chemotherapy drug paclitaxel, given on days 1, 8 and 15. Unlike standard paclitaxel, Abraxane does not need to be given with steroids. Treatment continued until they experienced disease progression or unacceptable side effects. The median follow-up duration was just over a year.

Across the entire study population, the median progression-free survival was 7.2 months with Tecentriq versus 5.5 months with placebo, a 20 percent reduction in the risk of disease progression of death. At one year, 24 percent of Tecentriq recipients and 18 percent of placebo recipients were still alive without progression. The difference was statistically significant, meaning it was probably not attributable to chance.

Among those who were PD-L1 positive, the median progression-free survival was 7.5 months with Tecentriq versus 5.0 months with placebo, a 38 percent improvement. Here, 29 percent and 16 percent, respectively, were alive without disease worsening at one year. Again, this was a significant difference.

Speaking at an ESMO press conference, Schmid said the improvement in progression-free and overall survival was attributable to the PD-L1 positive subgroup. PD-L1 negative patients saw no clear benefit.

Treatment was generally safe, but serious adverse events were common. Most side effects—including low blood cell counts—were related to the chemotherapy and were similar in both treatment groups, Schmid reported. However, people in the Tecentriq plus Abraxne group were twice as likely to stop treatment due to adverse events (16 percent versus 8 percent).

Immune-related side effects are a concern with checkpoint inhibitors. In addition to restoring immune responses against cancer, they can also take the brakes off the immune system more broadly, leading to excessive inflammation of healthy tissue including the lungs, colon and endocrine glands. Immune-mediated side effects were generally uncommon, but 17 percent of Tecentriq recipients developed hypothyroidism. No new or unexpected adverse events were seen in this study.

“While the benefit in terms of progression-free survival was relatively small, around three months, the gain in overall survival in the PD-L1 positive subgroup was impressive with a 10-month benefit,” Marleen Kok, MD, PhD, of the Netherlands Cancer Institute commented. “The IMpassion 130 data will probably change the treatment landscape for our metastatic triple negative breast cancer patients.”

Genentech said it has submitted these results to the Food and Drug Administration to support the approval of Tecentriq for this new indication.

Click here to read the full report in The New England Journal of Medicine.