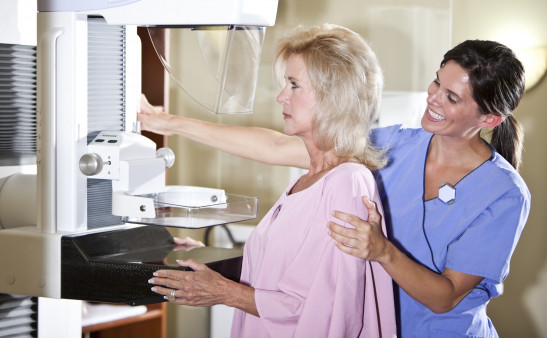 First-line treatment with the checkpoint inhibitor Tecentriq (atezolizumab) plus chemotherapy reduced the risk of disease progression or death for women with metastatic or locally advanced triple-negative breast cancer (TNBC), according to late-stage clinical trial results recently announced by Genentech, a Roche company.

Interim study data also showed an “encouraging” overall survival benefit for a subset of women with a favorable biomarker, the company said. These results have not yet been presented at a scientific conference or published in a medical journal.

The findings come from the IMpassion130 trial, a Phase III randomized, double-blind study evaluating the safety and efficacy of Tecentriq plus Abraxane (nab-paclitaxel), an albumin-bound formulation of the widely used chemotherapy drug, for patients with locally advanced or metastatic (spread beyond the breast) TNBC.

Breast cancer is classified by the kind of receptors it expresses. A majority of breast cancers, known as hormone-positive, carry receptors for estrogen or progesterone and treatment usually includes hormone-blocking drugs. Other tumors express the HER2 (human epidermal growth factor receptor 2) receptor and can be treated with HER2 inhibitors like Herceptin (trastuzumab). Triple-negative breast cancer doesn’t express any of these receptors and is more difficult to treat. TNBC, which accounts for around 15 percent of all breast cancers, tends to be more aggressive and is more likely to affect younger women.

IMpassion130 enrolled 902 participants with TNBC who had not yet been treated with other systemic therapies for advanced breast cancer. They were randomly assigned to receive IV infusions of Tecentriq (840 milligrams) or placebo on days 1 and 15 of a monthly cycle, in combination with Abraxane infusions on days 1, 8 and 15. Treatment lasted until patients experienced disease progression or unacceptable side effects.

Tecentriq is a monoclonal antibody checkpoint inhibitor that blocks the PD-L1 protein on cancer cells or immune cells inside tumors. PD-1 is an immune checkpoint, a receptor on T cells that plays a role in regulating immune function. Some tumors can hijack PD-1 to turn off immune responses against them. Drugs that block the interaction between PD-1 and its binding partner PD-L1 can release the brakes and restore T-cell activity.

This type of immunotherapy only works for a minority of patients. People with higher PD-L1 levels in their tumors tend to do better on this type of treatment, but it is not a reliable predictor of individual response. In studies to date, immunotherapy has not worked as well against breast cancer—considered a “cold” tumor—as it does against melanoma, lung cancer and other “hot” or inflamed tumors that carry many mutations and attract T cells. Research is underway to find ways to turn cold tumors hot so that immunotherapy will work better.

Genentech did not provide detailed results in its press release, but said that Tecentriq plus Abraxane demonstrated a significant improvement in progression-free survival, meaning patients were still alive without worsening of disease, in the study population as a whole. Looking at a subset of participants who tested positive for PD-L1, the interim data also suggested an improvement in overall survival, according to the company.

“IMpassion130 is the first positive Phase III immunotherapy study in triple negative breast cancer, an aggressive disease with limited treatment options,” said Roche/Genentech chief medical officer Sandra Horning, MD. “Highly encouraged by these results, we plan to submit to authorities globally with the aim of bringing this combination to people with triple negative breast cancer as soon as possible.”

The company indicated that detailed results will be presented at an upcoming medical meeting and will be submitted to the Food and Drug Administration and the European Medicines Agency for review.

Click here to read the Genentech press release about the study.