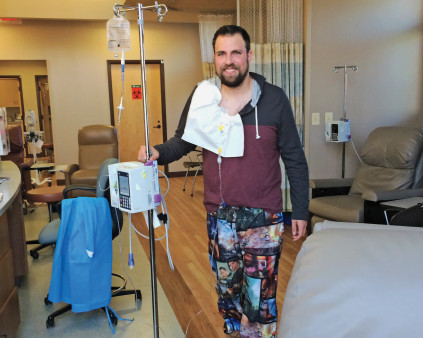 Justin Birckbichler, 26, is an elementary school teacher in Fredericksburg, Virginia. He is the creator of the blog A Ballsy Sense of Tumor, which appears on CancerHealth.com.

In the shower I did a testicular self-exam, something I’d been doing since I was 12. I felt a suspicious lump in my left testicle. In mid-September, I had felt a pea-sized hard lump, but I ignored it. Now, it was bigger. It was time to see the doctor.

Three weeks later, the doctor looked me in the eye and said, “You have cancer. We need to remove the mass immediately.”

I went home and talked to my then fiancée, now wife, Mallory. I knew surgery was necessary, but it was still a lot to process. I cried.

The radical inguinal orchiectomy removed my entire left testicle. Two days later, I got a CT scan and an X-ray. One of the nurses said I seemed to be taking my diagnosis well. It was my mindset: I’m going to get better, and being down about it won’t help.

While I was stuck in bed recovering, I started writing down my story. I kind of assumed that the surgery wouldn’t be the end of my cancer journey, which—plot twist—it wasn’t.

A scan showed that the cancer had spread to my lymph nodes. My diagnosis was Stage IIb nonseminoma, a more aggressive type of cancer. My doctor recommended chemotherapy. Grandpa’s mantra echoed in my head: “Just tell me what to do and I’ll do it.”

I decided to turn my diary into my blog, A Ballsy Sense of Tumor (ABSOT). It wasn’t going to be a “cancer sucks” blog—I would approach this in the happiest way I could.

My first day of chemo was November 28. I always wore funky pajama bottoms to chemo, and it was fun seeing the other patients’ smiles when I’d walk in with bright Star Wars or Avengers pants.

Having caregivers made it pretty easy, emotionally. My mom would come down from Pennsylvania for a couple of weeks at a time, and Mallory would take care of me during the weeks when my mom wasn’t there.

Even though we were new to the area and school, some of our neighbors helped out with chores, and coworkers brought food and care packages. It was awe-inspiring to see the kindness of (basically) strangers.

I had my final round of chemo on January 30. When I rang the bell at the finish, wearing my brand-new Avengers pants, everyone applauded.

My most recent CT scans were clear. Hearing the words You are in remission was surreal.

I would have another CT scan in June, and if those results were good, my chemo port could be removed. My doctor wanted to make sure it was out before our honeymoon. That meant a lot to me.

I was happy about remission, but this was mixed with anxiety about the possibility of recurrence. My doctor said cancer patients are often emotionally fine during treatment but struggle in the aftermath. Even though my body had begun to heal, my emotional recovery was only beginning.

During one of my now-daily self-checks, I felt what seemed to be a lump on my right testicle. Cue full-blown panic mode. The next morning, I made appointments for an ultrasound and an exam.

The results? Nothing. I couldn’t even feel the lump I’d been so sure was there the night before. My urologist suggested I might be self-checking too often. “Mondays suck anyway,” he said, “so make that your check day.”

Though it was tough, the first half of 2017 brought a lot of good too: remission, another new job, a second clean scan, our wedding.

Mallory and I went to Hawaii for our honeymoon. For two weeks, I didn’t worry about recurrence. We hiked up a crater, drove ATVs in Jurassic World and swam with dolphins—and I embraced every moment of it. 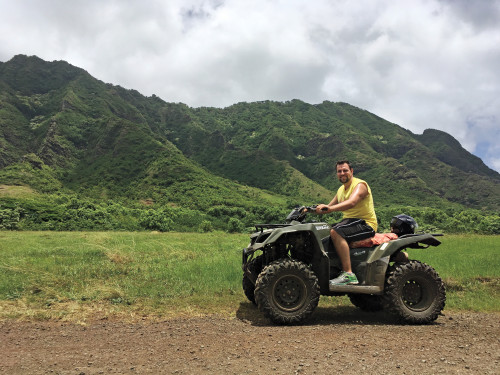 Prior to cancer, I was involved in about 10 different side projects. I was like a dog chasing a ball—little did I know I was about to lose one. But I was neglecting my relationships and other things that really matter. Halfway through chemo, I walked away from nearly all those projects. I wanted more time with Mallory and our pets and to work on spreading awareness with ABSOT.

In December, I had another scan. One lymph node was 1.3 centimeters. My doctor said he’d still consider me to be in remission and we’d keep an eye on it. My next scan is in June. I’ll be on a six-month rotation for the next few years.

April is Testicular Cancer Awareness Month. Since making my story public, I’ve jumped at every opportunity to talk about health and testicular cancer—it isn’t discussed nearly as much as other cancers. I do TV interviews, I’m producing a video for high school students on how to do self-exams and I lead a discussion on the Stupid Cancer app.

I still have a real fear of recurrence. No matter how many clear scans I’ve been lucky to have had so far, it’s always in the back of my mind.

Though running a cancer blog may seem counterproductive to not allowing my cancer fears to consume me, it’s important to get my feelings out on my terms, in a way that’s helpful for others. I want to offer a real-life perspective to other people with cancer, since that was something I had a hard time finding. I’ve been trying to show people that they’re not alone—there’s a community of people who can benefit from sharing our stories. 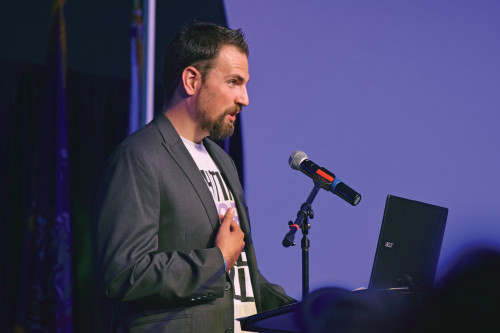 Seminoma and nonseminoma: The two main kinds of testicular cancer, classified according to the type of cells affected. Nonseminomas are more common and usually grow faster.

Orchiectomy: Removal of a testicle

Port: A small disk implanted under the skin for giving chemotherapy without injection into a vein