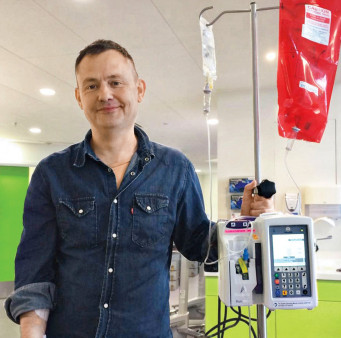 I Wish I’d Had the Vaccine

Roger Pebody is a medical journalist and the managing editor of aidsmap.com. He lives in London with his husband, Jean-Michel.

2017 was a crappy summer and maybe it didn’t have to be that way.

On the day after my 46th birthday, I received my first dose of chemotherapy and my first radiation session for oropharyngeal cancer caused by human papillomavirus (HPV).

Every weekday for the next six weeks, I was back at the hospital for more radiation, held immobile on the bench by a tight-fitting mask that ensured the beams were aimed at the tumor and missed as much healthy tissue as possible.

But there was collateral damage, despite the radiologists’ best efforts. Ulcers soon erupted on my tongue and in my throat, making eating more painful each day. My partner became increasingly expert at concocting bland, slippery and calorie-dense dishes for me. He used all his charm, persuasion and patience to get me to eat despite the pain. As treatment progressed, I became increasingly tired. Although I was able to go in to work for a few hours a day at first, after the third week, most of the time that I wasn’t at the hospital was spent lolling on the sofa.

I know that as cancer treatment stories go, I had it easy. What’s more, HPV-related oral cancers often respond well to treatment. The six-week course was successful, and my oncologist thinks the risk of recurrence is so low that now I have follow-up visits only once a year.

I recognize there’s no certainty that vaccination would have prevented my cancer. Almost all adults catch some of the more than 100 types of HPV at one point or another. When the first vaccine was introduced, I was in my 30s, so it’s possible I already had the HPV type that went on to cause my cancer. The newest vaccine protects against nine types of HPV. While I almost certainly had some of them, perhaps I didn’t have the one that caused all the trouble.

I’d like to think that had a health care provider offered me the HPV vaccine at some time during the previous decade, I might have enjoyed the summer of 2017 quite a bit more.