What is bone cancer?

Cancer develops when cells grow out of control. The two most common kinds of primary bone cancer, meaning it starts in the bones, are osteosarcoma, which involves bone cells, and chondrosarcoma, which starts in cartilage (softer tissue at the end of bones).

Cancer may also arise elsewhere in the body and spread to the bones through the bloodstream or lymph system, a process known as metastasis. Many cancers that originate elsewhere (such as lung, breast or prostate cancer) metastasize to the bones in their advanced stages, most often to the spine, ribs, pelvis and upper arm and leg bones.

Cancer is classified according to its original location—for example, breast cancer that has spread to the bones is called metastatic breast cancer, not bone cancer. Some blood cancers (leukemia, lymphoma and multiple myeloma) may involve the blood-forming cells in the bone marrow, the soft tissue in the center of certain bones, but these are not classified as bone cancer.

Who gets bone cancer?

Primary bone cancer is uncommon, accounting for less than 1 percent of all cancers, according to the American Cancer Society. About 3,300 people are diagnosed with bone cancer and about 1,500 people die from it annually. Most cancer that involves the bones has spread from elsewhere.

What are the risk factors for bone cancer?

A variety of factors are known to increase the likelihood of developing bone cancer. An important one is exposure to high doses of radiation, including a history of radiation therapy for another cancer in the past. Exposure to radium and plutonium also increases the risk. Bone cancer can occur five to 20 years after radiation exposure.

Other bone cancer risk factors include certain inherited genetic conditions, a history of chemotherapy and having Paget disease, a benign but precancerous condition that causes abnormal bone formation, mostly in people older than 50. Previous injuries, such as bone fractures, do not appear to increase the risk of bone cancer.

What are the symptoms of bone cancer?

Bones are the framework of the body and provide structure and support. Bones contain two main types of cells: osteoblasts, which lay down new bone, and osteoclasts, which dissolve old bone. Throughout life, new bone is constantly forming while old bone is broken down. Cancer in the bones can cause an imbalance in the activity of these cells, leading to weak or brittle bones.

Many people with bone cancer do not develop symptoms until its late stages, when it is harder to treat. Bone cancer symptoms may include:

How is bone cancer diagnosed?

Early detection and treatment of cancer increases the likelihood of long-term survival. The process of diagnosis starts with a physical exam and health history, including how long symptoms have been present. The exam will check for pain, swelling and other abnormalities, and a blood sample may be taken for testing.

Imaging tests, including X-rays, computed tomography (CT), positron emission tomography (PET) or MRI scans may be done to see how extensive the cancer is. A bone scan may be performed, in which a small amount of a radioactive tracer is injected into the blood to make the bones show up better in images. A small tissue sample (a biopsy) may be removed from a tumor to examine in the laboratory to see if it is benign or cancerous.

How is bone cancer treated?

Treatment for bone cancer depends on how advanced the cancer is when it is detected, the type of tumor, how many tumors there are, how large they are, the patient’s age and whether the cancer has spread to other parts of the body. Metastatic cancer that has spread to the bones from elsewhere is usually considered advanced and is difficult to treat.

Surgery: Some bone tumors can be surgically removed; this is known as resection. A piece of metal or a bone graft may be inserted to replace bone that is removed. In some cases a limb may need to be amputated to get all of the cancer.

Ablation: Bone tumors may be ablated, or destroyed, using methods including freezing (cryosurgery) or insertion of a substance known as bone cement or PMMA that kills cancer cells with heat.

Radiation: Radiation may be used to kill cancer cells that remain after surgery or to shrink tumors that cannot be surgically removed. It is often used in conjunction with other forms of treatment.

Immunotherapy: The newest type of treatment helps the immune system fight cancer. For example, some tumors can turn off immune responses against them, and drugs known as checkpoint inhibitors can restore T cells’ ability to recognize and destroy cancer cells. Current immunotherapy drugs work for only a subset of patients, and it is hard to predict who will benefit. 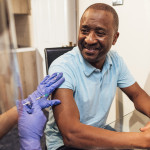