I was diagnosed with Stage IIB Nonseminoma cancer in November 2016. It’s a form of testicular cancer that had spread to my lymph nodes. I had surgery to remove the original mass on October 28th, and will be beginning chemotherapy on November 28th to get rid of the remaining cancerous cells. 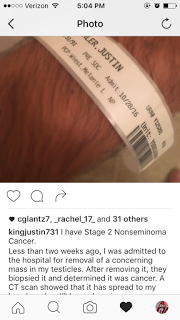 Naturally, my first priority after hearing my diagnosis was to tell my friends and family. However, after everyone in my life had taken care of when it came to knowing what was happening with my health, I wanted to keep going. I went semi-public with my diagnosis by sharing it on Instagram in early November. However, I had yet to share my news on Twitter. My Instagram account is private and largely comprised of friends from high school and college and distant family members. I only have about 100 followers, but on Twitter, I have more than six thousand. This is a huge reach and could have a real impact. I began thinking about using this reach to spread awareness about testicular cancer, a topic that is rarely discussed, as is men’s health in general.

The decision to potentially tell six thousand people is terrifying. While I have no problem Tweeting about my opinions on homework (it’s in how you use it), my stance on standardized testing (it’s too much), or my feeling on GSuite (I love it), letting people in personally would be a new order. I also didn’t want cancer to become my only identity. My handle is @Mr_B_Teacher, not @Mr_B_Has_Cancer. While I have shared some personal information, I still wanted the focus of my Twitter and blog to be educational.

However, I couldn’t put the thought out of my head that I should do something more when sharing my diagnosis on Twitter - something beyond just mentioning that I had cancer once and then never bringing it up again. Six thousand people is a lot, and I was close with a number of people who had more followers than that. I decided to use my diagnosis and my Twitter handle to my advantage in a new way - to spread awareness about men’s health and testicular cancer.

In mid-November, nine days after learning that I had testicular cancer, I decided that I would begin this awareness campaign. The goal from the beginning has been to share my personal story and journey from discovery to being cured. My hopes are that this will bring more open discussion and a larger focus to men’s health in general. Knowing someone who is going through cancer can help make it more real. I would put my face where their balls are (which is a somewhat awkward turn of phrase).

Knowing this, I decided to start this blog, A Ballsy Sense of Tumor. The title was important to me. It had to convey it was about testicular cancer and that I would be talking about it in as much of a positive light and with as much humor as you can use when discussing cancer. While cancer is no laughing matter, my outlook on my story has to approach it with humor and positivity. I will beat this; there has never been doubt in my mind.

I knew I couldn’t do it alone. I first reached out to my friend, Katie Kraushaar, to help me produce and edit the pieces that will appear on this blog. These will be my words, but she helps me sound better. I also know that as I start chemo, I won’t be able to keep up with it by myself. Her support from the start of this journey has been invaluable.

Over the course of a few days, we worked together to brainstorm ideas for what ABSOT would look like. We decided to tackle three different aspects of my cancer journey:


We decided to launch it in November because the month is supposed to be used to raise awareness for men’s health issues. I couldn’t have gotten cancer at a better time! Thinking on how to heighten the impact, I personally reached out to a number of men who I admired and respect to help me boost awareness. I wanted to use influential men to help underscore that this is a men’s issue and we need to highlight it as such. Thank you to Ben Brazeau, Ben Cogswell, Mark Wagner, Lee Aroaz, Doug Robertson, Quinn Rollins, Don Wettrick, Dave Burgess, Mark French, Jay Atwood, Steven Isaacs, Mark Bartmas, Matt Miller, James Sanders, Greg Bagby, Donnie Piercey, and Mark Barnes for helping spread awareness about an issue that affects all lives.

ABSOT was first mentioned on the “I Have Cancer: Telling My Students” post on my educational blog. This marked the bridge between my identity as a teacher and my newer identity as as cancer patient. On November 20th, I pressed publish. Finally, the whole world knew my diagnosis.

This blog entry originally appeared on A Ballsey Sense of Tumor (ABSOT) and is reprinted with permission.