Here it is National Survivors Day and all I can think about is how I’m aging out.

I’ve been in medically induced menopause since 2017. Going through breast cancer definitely aged my body but being medically induced into menopause shoved me all way into serious aging both internally and externally. The only part of my body that has never changed is the shape of my eyes. Everything else is no longer even close to what I used to know.

I posted a video on my Instagram earlier this week about my menopausal hair. I finally threw in the towel and got it severely chopped off after a year of trying to grow it out. I truly thought once the chia pet tight curls fell away, that I would look like myself again. Instead, my hair began to look stringy and thin. It literally stopped growing on the right side and in the back. I was beginning to look lopsided because the left side of my hair was going back beautifully. Getting this radical cut was an uncomfortable decision for me but needed to be done. 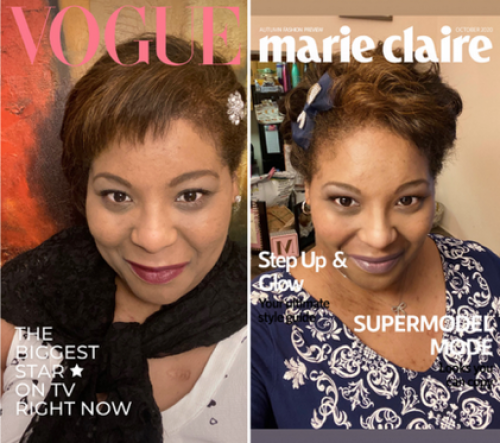 Me this week having too much fun with the app Easysnap!Courtesy of Megan-Claire Chase

There’s an illusion that we’re in control of our bodies. When going through cancer and having a chronic illness, it is plain to see I have little control over anything, especially my body. I had gotten back into exercising but suddenly stopped due to fibromyalgia pain in my back. It was so bad that I couldn’t sleep or move without wanting to cry. Now I’m back to trying to get motivated to workout. The belly fat is my nemesis. I don’t even want to take any full-length pictures because of my whale shaped body.

So, I’m aging out of many categories that used to feel somewhat natural and supportive. Instead of being one of the “young” ones in a group, I am often the oldest person in the group. Making friends as an adult is hard. Making friends as a single adult past a certain age feels impossible. I’ll be checking a new age box on my birthday which is July 3rd. This thought has thrown me into a complete panic and despair. The bulk of the people I know are married or living with someone and have kids. The few single people I do know already have a strong friend group. The wish to hang out with friends on a consistent basis is over. No one has time anymore.

Aside from having zero sex drive, I’ve become way to set in my ways to make room for a relationship. Heck, I had hard enough time when I had the hot body to find someone who didn’t look at me like an alien because I’m difficult to classify and don’t fit any typical categories. I continue to straddle between the black and white world without fully fitting into either.

I am five years no evidence of disease (NED). It just hit me this is the longest relationship I’ve ever been in. Will NED be with me forever? Do I want to live with NED with such a low quality of life? While my brain is sharper than it was five years ago, my body has yet to catch up. How much of this aging is natural? I think zero because I feel like a 544-year-old on a daily basis. I just don’t necessarily show it in selfies or on zooms because of acting. I win daily Oscars, Emmy, Golden Globe, and Tony awards.

Can anyone even tell when I’m faking and when I’m being real?

This post originally appeared on Life on the Cancer Train on June 6, 2020. It is republished with permission.