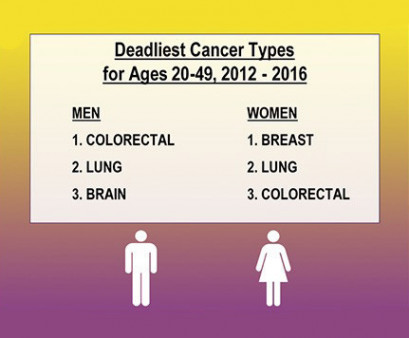 Special section on adults ages 20 to 49 shows higher cancer incidence and mortality for women than men.

The latest Annual Report to the Nation on the Status of Cancer finds that, for all cancer sites combined, cancer death rates continued to decline in men, women, and children in the United States from 1999 to 2016. Overall cancer incidence rates, or rates of new cancers, decreased in men from 2008 to 2015, after increasing from 1999 to 2008, and were stable in women from 1999 to 2015. In a special section of the report, researchers looked at cancer rates and trends in adults ages 20 to 49. 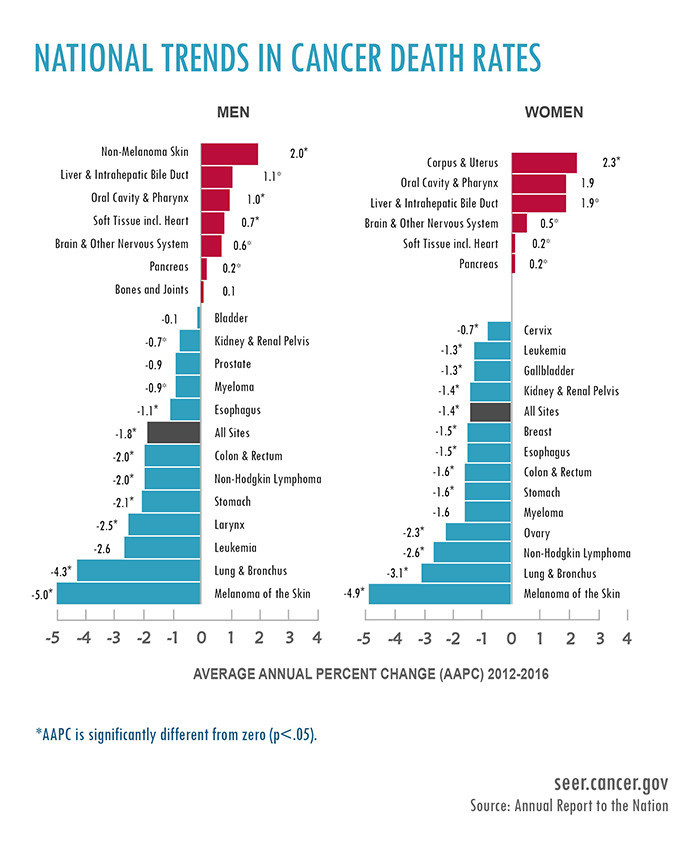 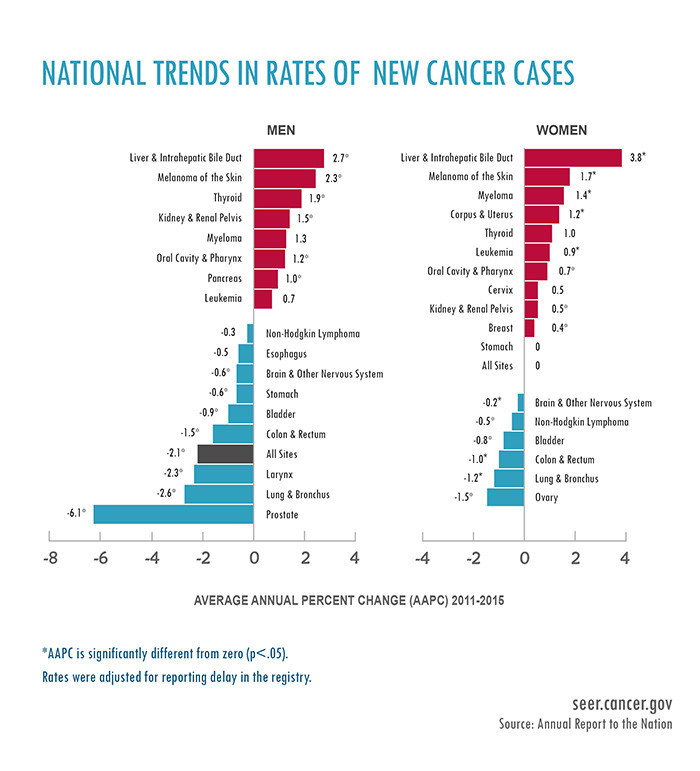 From 2019 Annual Report to the NationCourtesy of National Cancer Institute

“We are encouraged by the fact that this year’s report continues to show declining cancer mortality for men, women, and children, as well as other indicators of progress,” said Betsy A. Kohler, executive director of NAACCR. “There are also several findings that highlight the importance of continued research and cancer prevention efforts.”

The special section shows a different picture for cancer incidence and mortality among men and women ages 20 to 49 than among people of all ages. In the main report, from 2011 to 2015, the average annual incidence rate for all cancer sites combined was about 1.2 times higher among men than among women, and from 2012 to 2016, the average annual death rate among men (all ages) was 1.4 times the rate among women. However, when the researchers looked only at men and women ages 20 to 49, they found that both incidence and death rates were higher among women.

“The greater cancer burden among women than men ages 20 to 49 was a striking finding of this study,” said Elizabeth Ward, Ph.D., lead author of the study and a consultant at NAACCR. “The high burden of breast cancer relative to other cancers in this age group reinforces the importance of research on prevention, early detection, and treatment of breast cancer in younger women.”

“It is important to recognize that cancer mortality rates are declining in the 20-to-49-year-old age group, and that the rates of decline among women in this age group are faster than those in older women,” said Douglas R. Lowy, M.D., acting director of NCI.

The authors also reported in the special section that the incidence rates of in situ breast cancer and nonmalignant central nervous system tumors among women and men ages 20 to 49 are substantial. They wrote that some of the most frequent malignant and nonmalignant tumors that occur in this age group may be associated with considerable long-term and late effects related to the disease or its treatment. The authors conclude that access to timely and high-quality treatment and survivorship care is important to improve health outcomes and quality of life for younger adults diagnosed with cancer.

This year’s report found that, among all ages combined, existing incidence and mortality trends for most types of cancer continue. Rates of new cases and deaths from lung, bladder, and larynx cancers continue to decrease as a result of long-term declines in tobacco smoking. In contrast, rates of new cases of cancers related to excess weight and physical inactivity—including uterine, post-menopausal breast, and colorectal (only in young adults)—have been increasing in recent decades.

Several notable changes in trends were observed in the report. After decades of increasing incidence, thyroid cancer incidence rates in women stabilized from 2013 to 2015. The authors wrote that this could be due to changes in diagnostic processes related to revisions in American Thyroid Association management guidelines for small thyroid nodules.

“The declines seen in mortality for melanoma of the skin are likely the result of the introduction of new therapies, including immune checkpoint inhibitors, that have improved survival for patients diagnosed with advanced melanoma,” said J. Leonard Lichtenfeld, M.D., M.A.C.P., interim chief medical officer of ACS. “This rapid change shows us how important it is to continue working to find effective treatments for all kinds of cancer.”

Other notable findings about cancer mortality from the report include that from 2012 to 2016:

“Major declines overall in cancer mortality point in the right direction, yet significant differences remain in cancer cases and deaths based on gender, ethnicity, and race,” said CDC Director Robert R. Redfield, M.D. “A better understanding of these discrepancies improves cancer diagnosis and recovery for all patients and is vital to our public health mission.”

For more about the report, see: https://seer.cancer.gov/report_to_nation/

This press release was originally published on the National Cancer Institute website on May 30, 2019.