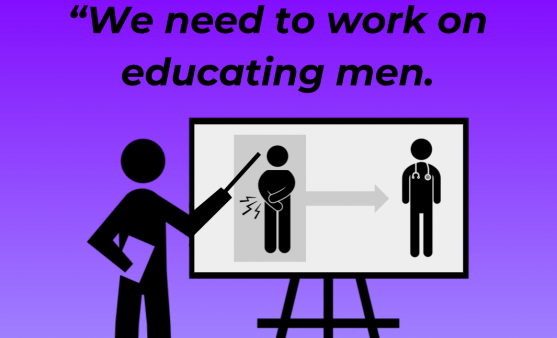 The Urology Foundation releases startling figures on what British men know about testicular and prostate cancer.

Whether it’s CACTI’s study on men’s perceptions of testicular cancer, the Cleveland Clinic’s survey on the state of men’s health, or my own dive into understanding what how doctors perform and teach about testicular exams, I have developed quite the affinity for reading research studies and surveys about men’s health.

In early November, I came across a new men’s health study from The Urology Foundation, a UK-based charity that “leads the fight against urology disease.” While this study focused exclusively on British men, it was still eye opening. I reached out to them to get some more insights and to ask permission for me to repost their findings… and of course, I had to add my own ABSOT spin.

What do British men know about testicular cancer?

Each time I read different studies and see numbers like this — I think two things. First, I realize just how important my mission truly is in this world. Second, I get fired up that someone dropped the ball on sharing such important information with men. If you don’t know to know to do these things, you aren’t going to do them. How can you know what you don’t know — you know? It’s up to doctors and patient advocates to band together to share this information widely.

For those men who didn’t know this information, 15-44 is the “high risk” age range, with over 50% of cases occurring in this age band. In the past year, you should have performed a self-exam once a month, for a total of twelve. If you’re not sure how, allow me to tell you (or click here if you’re more of a visual learner):

Best done during or after a shower when the scrotum is relaxed, a self exam is a quick and effective way to catch testicular cancer early on. Just place your index and middle fingers under the testicle with your thumb on top. Firmly but gently, roll the testicle between your fingers. Any weird lumps or bumps should be checked out by a doctor ASAP. When you get out of the shower, be sure to look for signs of changes in shape, color, or swelling.

What do British men know about prostate cancer?

While I have a vague understanding of these matters, these were topics I admittedly needed to research to fully understand. According to the American Cancer Society, a prostate is a gland found only in males that makes some of the fluid that is part of semen. Prostate exams should begin at 50 years old for average males (and as early as 40 for the higher risk population).

I was correct in knowing that the prostate had something to do with the male reproductive system and that it’s generally screened later in life. However, I’m not sure that this is something I knew off hand before making my life’s work about men’s health. I also am assuming that even though I am citing American Cancer Society statistics, the same holds true across the pond.

Though prostate cancer is generally regarded as an “older man’s cancer,” any man with a prostate can develop it — the twisted mirror of testicular cancer being a young man’s disease. Either way, more men need to know this information so they know what to look out for.

To this end (pun very much intended), I commend a new fellow advocate friend, Gabe Canales, for committing to educate young men about prostate cancer (and how to lower risk from an early age) through his Blue Cure foundation. Stay tuned for a future Band of Ballers from Gabe!

How do urology diseases affect British men’s outlook on relationships compared to women?

When I emailed TUF to ask for further information, they shared the above two statistics along with the following anecdote:

“I had a prostate cancer patient tell me that he’s heard other men say that they’d rather not know if they have prostate cancer because they’re worried what the cancer and subsequent treatment could mean for their sex life.”

This connects to what many of the themes, quotes, and anecdotes in Manhood: The Bare Reality encompassed. Men view their genitalia as an extension of their manhood and will literally choose to be kept in the dark so they don’t have to admit to problems in the bedroom… also in the dark. Unfortunately, this is a damaging, and possibly fatal, mistake that we must work to change.

What does The Urology Foundation plan to do to fix this?

Statistics are important, but more crucial is actionable steps. I asked TUF for their overall thoughts on this study:

“Unfortunately, getting men interested and engaged with their urological health has been an uphill battle for far too long. Urology disease for men often means problems with sexual function and once you start to get into that territory, a lot of men put off dealing with it, and it’s easy to understand why.”

“We need to work on educating men. The message is simple: the sooner you deal with a problem, the more chance you have of getting it fixed. If you notice something out of the ordinary for your body, whether it’s struggling to pee, peeing too often, a lump on your testes, or difficulty with erections, you need to see your doctor.”

It’s not just a fancy quote; they’re doing the hard work to raise awareness wherever and however they can.

They have Urology Health pages that provide information on a variety of diseases. Beyond their own site, they write articles that are aimed at getting men to take greater care of their health (including a post in the Huffington Post recently). Just as Ken Lane created #Takea2nd4theBoys, TUF set up #TUFnutsTuesday which encourages men to check their testes on the first Tuesday of every month and use our social media channels to share urology health information. They’re also working to get leaflets and slideshows into GP (general practitioners) waiting rooms.

As I was emailing back and forth with TUF (and often getting confused why their emails would come at like 3 am, before realizing time differences between North America and Europe are a thing), I realized that perhaps I need to take ABSOT’s mission more worldwide.

In looking at my audience analytics, United States visitors account for well over half of all viewers. I am based in America so this make sense, but men’s health is a worldwide issue. Furthermore, while I am focused mainly on testicular cancer, I need to make sure I’m also highlighting other men’s health conditions. We need to bring all nations of the world together to rally around this important message.

Only through collaborations between men’s health organizations and activists of both the Western and Eastern hemispheres can we make sure men know how to take care of their own ‘hineys’ and spheres.