I started my clinical trial for BLU-945 last week, and this targeted therapy already looks like it’s hitting the bullseye.

But getting here hasn’t been easy. When we went over my latest scan results the day I started the trial, we found out that there was “significant worsening” of the cancer including the lymphatic system in my lungs, fluid buildup, and “ground glass” opacities in the lungs. No wonder I was feeling worse. But it didn’t stop there. There are two small spots each on my liver and brain, which I’ve never had before. My breathing had gotten extremely challenging lately, to the point where walking up a flight of stairs left me gasping for air. My cough had progressed to being almost constant. It seemed bad enough that I don’t know if I could have gotten on a plane if this trial had started a couple weeks later for me. This was not good. 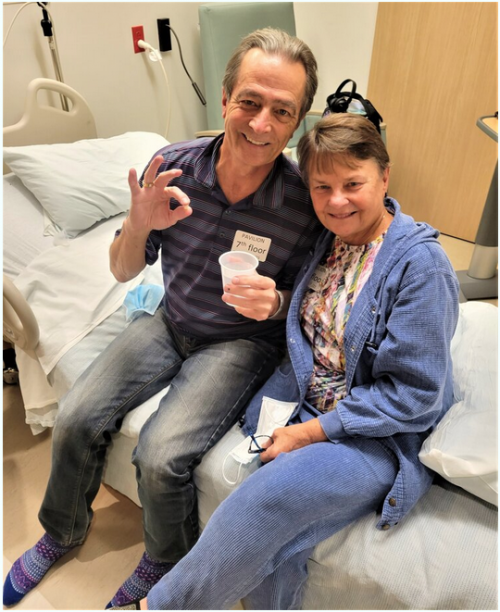 At this point I don’t mind saying I was pretty scared. What if the trial doesn’t work? Will I have time to get going on another treatment before it’s too late? I normally try to focus on the present, but I also had to think of a Plan B if things got any worse. Would the best option be to try another trial, which is a gamble, or go with chemo, which works but not all that well?

But the good news came quickly. After just a week in the trial, the results couldn’t be better. Within one day, after just one pill, my cough was almost gone. My breathing has gotten so much better that I can climb that same flight of stairs and just keep walking. I’m breathing hard, but not gasping for survival. The results happened so fast I had to question whether it was a placebo effect.

For those of you interested in this medication for yourself, side effects have been minimal. A few days with an overactive gag reflex and some nausea are about it. Another thing to be grateful for!

It’s early days, and we don’t know if this new wonder drug will hit all the trouble areas, but so far we’re happy.

It’s always more complicated than that, however. A few days before starting the trial I developed a back pain severe enough that a long plane to LA is excruciating. I’m up every hour or hour and a half at night to take heavy duty pain meds, ice my back, use a menthol rub, or try levitation – whatever it takes to distract me from the pain. Finally my PCP prescribed a med for nerve pain, which is helping, and my oncologist ordered an MRI. The pain is likely caused by cancer in my spine, so if BLU-945 doesn’t take care of it very quickly, I’ll probably have radiation again.

Despite the pain, this is another time when I feel extremely fortunate. The trial had almost filled up for people with EGFR by itself, which I have, but remains wide open for people EGFR plus T790M or C795S. It’s a lot like when I got into the clinical trial for Tagrisso three days before the trial closed. That drug worked wonderfully for me for seven years.

Let’s hope this one works for just as long!

This post originally appeared on Dann’s Cancer Chronicles on October 9, 2021. It is republished with permission.