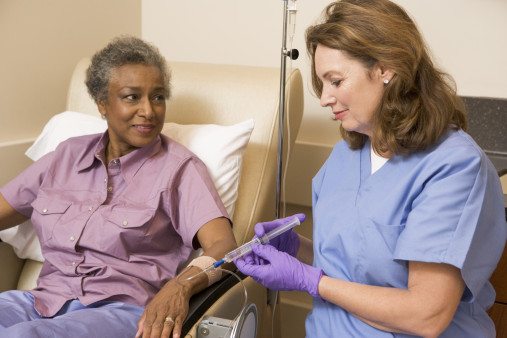 Analyzing more than 500 people with melanoma, researchers found that older people seemed to respond better to the treatment than younger people.

Immune checkpoint inhibitors—drugs that unleash an immune response against cancer—work astonishingly well for some people with advanced melanoma but do not work at all for many others. Clinicians and researchers are eagerly searching for factors that can help identify patients that are most likely to have good responses.

Now researchers believe they have found a simple characteristic that may be associated with how well somebody with melanoma will respond to checkpoint inhibitors: age.

In an analysis of more than 500 patients, researchers found that older people with melanoma appeared to respond better to checkpoint inhibitor treatment than younger people. A follow-up study in mice suggested that the pattern might be due, in part, to an age-related shift in the kinds of immune cells found inside melanoma tumors.

The researchers also identified a potential strategy to improve responses to checkpoint inhibitors in younger people. Giving young mice a drug that eliminates one type of immune cell before treating them with a checkpoint inhibitor substantially improved their responses. This combination treatment approach “might have great benefit in young patients,” the investigators wrote June 13 in Clinical Cancer Research.

Elad Sharon, MD, MPH, of NCI’s Cancer Therapy Evaluation Program, who was not involved in the research, said that although the findings are interesting, they are preliminary and that clinicians shouldn’t alter their approach to immunotherapy treatment just yet.

The research team, led by Ashani Weeraratna, PhD, of the Wistar Institute in Philadelphia, evaluated data on people with metastatic melanoma who had been treated with the immune checkpoint inhibitor pembrolizumab (Keytruda) at several cancer centers around the world.

More people age 62 or older had tumor shrinkage (they responded) or had stable disease after pembrolizumab treatment than did people younger than age 62 (63% versus 51%). The researchers observed a similar pattern in both women and men, as well as in people who either had or hadn’t been previously treated with a targeted therapy against a gene that is commonly mutated in melanoma tumors.

For every decade of age, the probability that a patient was resistant to pembrolizumab treatment dropped by 13%, the researchers observed.

They observed a similar pattern in mice implanted with melanoma tumors. Treatment with a checkpoint inhibitor slowed tumor growth in older mice but not in younger mice bearing genetically identical melanoma tumors.

These results came as a surprise, said Weeraratna, because the activity of the immune system generally declines with age. But “because the [clinical] data came from different [cancer centers], it really spoke to the robustness of this effect,” she noted.

What the findings call for, said Sharon, “is more translational research to understand the differences between patients that respond or fail to respond” to checkpoint inhibitor treatment.

Cytotoxic T cells are a type of immune cell that recognize and kill infected and cancer cells. Because these cells can damage healthy tissues if not kept in check, their activity is tightly controlled by another type of immune cell, known as regulatory T cells.

When Weeraratna and her team examined melanoma tumors of both young and old mice, they found that the total number of immune cells inside the tumors was similar. However, the tumors of young mice had more regulatory T cells and fewer cytotoxic T cells than the tumors of older mice. They did not observe this age-related shift in T cell types in the other organs of mice.

And in an analysis of melanoma tumor samples from a separate group of more than 200 patients, the tumors of younger patients also had more regulatory T cells and fewer cytotoxic T cells than those of older patients.

The findings suggest that cytotoxic T cell activity is suppressed by regulatory T cells in melanoma tumors of younger patients, the researchers wrote, limiting the effectiveness of immune checkpoint inhibitors.

In a follow-up study, they are investigating the role of the skin’s architecture in this process. “The skin has a very stiff, defined matrix that starts to break down as we age. This is part of what we think is affecting the way immune cells migrate” to melanoma tumors, said Weeraratna.

There are also specific kinds of regulatory T cells that inhabit the skin, Weeraratna explained. “We think those change with age, too, so that’s something else that we’re exploring,” she said.

How age affects the types of T cells found in tumors of the lung or stomach, for example, may be completely different, she added.

But, so far, such effects haven’t been observed. In a handful of small clinical trials, regulatory T cell­–depleting drugs did not cause autoimmune responses. However, one such drug—known as daclizumab (Zinbryta)—was recently withdrawn over concerns about brain toxicity.

Several ongoing trials are evaluating the efficacy of other T cell­–depleting drugs in combination with immunotherapies, Sharon noted. For instance, investigators of an NCI-funded phase 2 clinical trial are testing varlilumab, a drug that appears to deplete regulatory T cells when used in combination with the immune checkpoint inhibitor nivolumab (Opdivo).

Another trial, also sponsored by NCI, is evaluating the regulatory T cell­–depleting drug mogamulizumab in combination with pembrolizumab for the treatment of people with diffuse large B-cell lymphoma. The investigators of both trials plan to study the role of regulatory T cells in treatment response by examining tumor biopsy specimen from participants.

This post was originally published on July 6, 2018, by the National Cancer Institute. It is republished with permission.