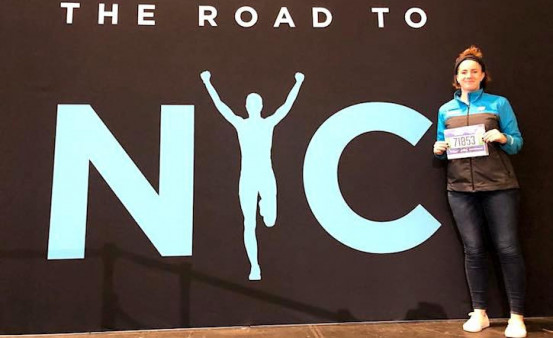 And what a road it has been.

From Cancer to Marathon

Writing this recap feels like it was a year in the making. Oh wait, it was. I hadn’t even finished my Herceptin treatments (IV infusion) before I decided I was going to run a marathon. It was November last year and I opted for a charity bid in Chicago (which eventually became NYC after New Balance offered to sponsor my bib). I had never run more than 10k before and I knew I was pretty slow. Not to mention my body was still waxing and waning with the post-chemo effects and trying to muddle through what Herceptin was doing. Most people start training for their fall marathons in June or July. I started in December 2017.

After signing on with my coach, Alison, we began weekly training calls and programs. This began with simply walking on the treadmill for 20 minutes at a faster speed. And that was so, so hard. From there we introduced miles, and I remember running one and feeling so accomplished, but wondering how I would tack on 25.2 more. Turns out, you just need to focus on the day of. Never think about the day to come, because it will overwhelm you. As the months went on and the miles increased, I found myself checking off distances I had never thought of. I ran an official half marathon, several 5ks, 10ks, and my long runs in the woods ranged from 10–20 miles. I introduced foam rolling (or as I like to call it, Jen flails around on the floor for 20 minutes), strength training (aka Do I actually feel like doing this after 10 miles?) and race nutrition (gels, salt tablets, waffles).

I was fortunate enough to be offered a hotel through New Balance and that gave me access to their VIP Runner amenities. This meant I got to fast-track the bib pick-up line, attend their pre-race buffet dinner, jump on their shuttle in the morning and sit in the VIP Runners tent before the race began.

Personally I was feeling very nervous, I hadn’t slept well but I felt strong, I kept the reasons I was doing this in my head: In 2017 I could barely walk; in 2018 I was rewriting my history. Unfortunately my period had shown up, and due to having had an hormonal cancer, there was no pill or trick in the world that could stop the powers of Aunt Flo. So in went the tampons to my running belt; had to keep that in check even if I didn’t want to.

So. Let’s get to it shall we? I had woken up at 4am to get myself to the start line on Staten Island, but I wasn’t slated to run until 11am in Wave 4. That in itself made for a long day. I had packed all of my essentials but I don’t think I brought enough warm up clothes to donate, and a blanket would have been nice. ’Twas a chilly one.

I knew my period was going to be an issue: It was day 2 of my cycle and I couldn’t just ignore it for 26.2 miles, not without repercussion. I also knew my friends would be waiting for me at mile 8, so I planned to stop and use the bathrooms for a tampon change around mile 7. Given that this was my first marathon, I didn’t know what to expect. When I pulled off to get in the line, I just assumed all the lines would be that long.

I was wrong. At this particular mile, people had cut in from the other side, therefore halving the amount of bathrooms per each line, and causing a severe backup on both sides. I had already wasted 10 minutes and I just didn’t want to chance having to do it again down the line. So, I waited another 10 more and off I went.

Turns out, no other mile had a line for the bathrooms, I chose the worst possible one. But I simply didn’t know that. I had been pacing with the 6-hour finishers and I knew I could surpass them at the end, but at this point they were long gone. I looked down at my watch and I knew my sub-6 hour dreams were over. That if I pushed to catch up, I would hit a wall before the finish. So I sucked it up, remembered why I was there, and decided to just enjoy the atmosphere.

Later in the race (Mile 20), my hip began to give out and I should have stopped by a medical tent to get stretched out, again, this wasn’t something I knew I could do. But I managed to stop and stretch myself out and hobble ran my way on.

Another thing I would say is that because the race was so well-serviced, I definitely didn’t need as big of a hydration belt as I had brought. It probably weighed me down in the end, but now I know, right?

After the Mile 7 debacle, I felt ok but I was a little disheartened. Nevertheless I was able to see my friends waiting for me at Mile 8 and I felt rejuvenated. Miles 8-12 were filled with the most electric people on the sidelines. Funny signs, orange slices, live music and people dancing and drinking in the streets. NYC was waving to you, and you had to wave back.

At Mile 12 I saw some other friends, stopped for a hug and realized I was almost halfway! I was still feeling strong, no aches and pains had set in, I knew if I got myself to 16.2 I would be finishing the damn thing, because what’s 10 more miles?

Miles 12–16.2 went off without a hitch, so much so that I barely even remember them. I saw some more friends (unexpectedly!!), hydrated, and scuttled on until I hit that personal milestone of 16.2. I high-fived and laughed and cried and turned my music off to jam with the city. It was amazing.

Then I hit 16.2 and I realized that 10 miles felt like a lifetime away. I knew this part of the race would be the most challenging mentally. Miles 17–20 felt like absolute agony out in the woods, and they honestly weren’t made much better by 50,000 others. The crowds during those miles had died down, I was back of the pack and the day was getting later. The hills kept coming and they were starting to take their toll. That’s when I started to repeat my mantra, “The road is tough but I am tougher.” I called on my friends in spirit, imaging that Jemma was running by my side. Or that my coach was screaming for me on the sideline. Honestly, I think I hallucinated, and I cried A LOT. One foot in front of the other no matter what.

My hip was screaming at this point, but at Mile 24 I knew I couldn’t take anymore walk breaks: It was time to finish. The sun was setting and I was tired. But there was more in me. So I ran, slowly, and not very on form, but I ran. And I didn’t stop, because I knew if I did I wouldn’t start up again. And yeah, Central Park in the fall is beautiful but at this point I COULDN’T FUCKING CARE ABOUT THE PRETTY LEAVES OK.

So I ran past my friends at Mile 25, waving a simple I Love You sign and finally seeing the bright lights of the finishers’ pavilion. At this point most people around me were walking so I had to weave a bit and that sucked. But I kept going, I ran with everything I had, I didn’t even stop or pose for a finisher photo because I was running on empty and I needed to get there. I turned the corner into the park and that’s when I saw it, the finish, and everyone else around me faded away.

I don’t know who finished around me, I don’t know who handed me the medal, I don’t know where I went afterwards. I only remember seeing Maura and then picking up my bag. The guy said, “Hey, congratulations,” and I replied, “Last year I had cancer, this year I finished a marathon.” He might have said something back but I don’t recall, because I was saying that more for myself.

I definitely had this idea in my head that after the race I would drink and be merry with my friends into the wee hours. But I was drained, I couldn’t even emote. And my body wanted me to thank it by going to sleep. I had some pizza and a beer with friends then I went back to the hotel, and I rested. And it was perfect.

I thought that in the end, after all the months of training and pain and nerves, that I would never set foot on a marathon course again. That I had done the damn thing but that it was over and it was time to move on. But even as I sat in my bed, legs throbbing, mind a blank, I knew I wasn’t done. The course has sunk its teeth in, the miles were calling back out to me. Inviting me back with all the knowledge that I know now. Whispering that I could go faster. Pulling at me to take it on.