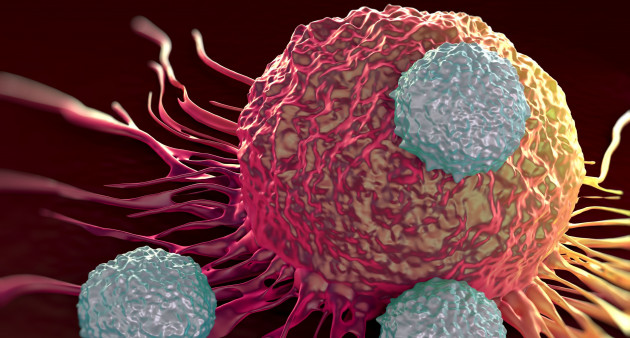 The researchers are now designing a first-in-human clinical trial to test the effectiveness of this approach in patients.

The success of CAR T (short for chimeric antigen receptor T) therapies, which essentially engineer a patient’s immune T cells to attack cancer cells, has been transformative in people with otherwise terminal blood cancers. However, many patients relapse, and CAR T therapy has not worked with solid tumors. Damon Runyon Clinical Investigator Christopher A. Klebanoff, MD, and colleagues at Memorial Sloan Kettering Cancer Center have discovered that the patient’s tumor may be sending a self-destruct signal, killing the CAR T cells. The researchers devised a way to cloak the cancer-fighting cells, so they survive to successfully attack the tumor, which may be key to making this therapy work in other cancers.

CAR T therapy involves isolating the white blood cells called T cells from a patient and inserting a gene so that they recognize cancer. These engineered cells are then infused back into the patient, where they seek out and kill tumor cells. However, Klebanoff found that the tumor microenvironment may launch a counterattack by triggering a self-destruct signal in the immune cells.

Using sequencing data from more than 9,000 tumors and 26 kinds of cancer, they identified a likely candidate for that molecular kill signal: a gene called FASLG. This gene is over expressed in more than three-quarters of both solid tumors and blood cancers and the target of FASLG is found at high levels on the surface of CAR T cells, which explains why the immune cells may have trouble surviving in the body.

To protect the immune cells, the researchers genetically modified them so they would be impervious to self-destruct signal. They tested these modified cells in mouse models of cancer and in human cancer cells in culture. They found that the cloaked T cells lived longer and were more effective at destroying tumor cells for a longer time period.

The researchers are now designing a first-in-human clinical trial to test the effectiveness of this approach in patients. “This is a potentially generalizable strategy that needn’t be constrained to one type of cancer or one type of CAR T cell. We could apply this cloak to any kind of immune cell therapy to make it work better,” says Klebanoff.