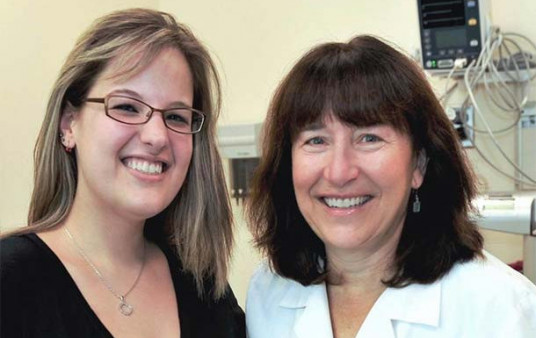 Jenn Ferguson (left), one of the first people treated on the CALGB 10403 trial, and Wendy Stock, MD. During treatment, Ferguson continued her education and went on to earn a professional degree, marry, and become a proud mother of two. Courtesy of the University of Chicago

Experts say the regimen will become the standard of care for people up to age 40 who are newly diagnosed with acute lymphoblastic leukemia.

An intensive treatment regimen developed specifically for children with acute lymphoblastic leukemia (ALL) is also effective for older adolescents and young adults (AYAs) with the disease, according to new results from a clinical trial.

The pediatric regimen more than doubled the median length of time patients went without experiencing debilitating symptoms or a return of the cancer, a measure known as event-free survival. In the trial, called CALGB 10403, the median event-free survival was 78.1 months, compared with 30 months for historical controls, researchers reported in Blood on January 18.

“The CALGB 10403 study demonstrated that it is both effective and feasible to treat young adults up to age 40 with a pediatric regimen administered by medical hematologists/oncologists” who do not specialize in pediatric cancer, said Wendy Stock, MD, of the University of Chicago Comprehensive Cancer Center, who led the trial.

Compared with treatment regimens for adults with ALL, the pediatric regimen includes more intensive dosing of certain drugs as well as more prolonged and concentrated treatments to stop the disease from spreading to the brain and spinal cord.

Those questions have now been answered, according to Nita Seibel, MD, head of Pediatric Solid Tumor Therapeutics in NCI’s Cancer Therapy Evaluation Program, who was not involved in the study.

The pediatric regimen was identical to one used in a Children’s Oncology Group trial called AALL0232. The regimen includes, among other drugs, escalating doses of methotrexate followed by PEG-asparaginase.

Although up to 90% of children with ALL who receive intensive treatment are cured of the disease, AYAs have historically had worse outcomes, with event-free survival rates of 30% to 45%, the study authors noted.

Stock and her colleagues developed the current clinical trial after observing more than a decade ago that some AYA patients with ALL fared better on pediatric treatment regimens than on adult regimens.

To test this observation in a prospective trial, three NCI-supported clinical trials groups analyzed 295 patients aged 17–39 years old with newly diagnosed ALL who were treated with the intensive pediatric regimen. The median age of the participants was 24.

“We had no more deaths due to treatment than we see in pediatric patients with newly diagnosed ALL, but we did have some increased side effects, as we expected with the intensive treatment regimen applied to young adults,” said Stock.

For instance, in the CALGB 10403 study, there was a higher incidence of certain complications—including those involving the liver—during the initial part of the treatment regimen, called induction therapy, than was seen in the AALL0232 study.

“There was evidence of more side effects in some patients, but the oncologists on the trial were able to make adjustments and deliver the therapy as it was supposed to be delivered,” Seibel said.

Predicting the Response to Therapy

Patients in the study who were obese, “and particularly those who were very obese, had worse outcomes than other patients,” Stock said. Nearly a third of the patients in the trial had a body mass index of 30 or higher, which is considered obese.

“The impact of obesity on the outcomes of patients was dramatic,” Stock added, noting that more research is needed to understand the reasons for this association.

“We are not sure why obese patients do worse than other patients, and that’s something we want to investigate in AYA patients,” said Seibel.

“We confirmed that finding in our study,” said Stock.

Building on the Current Regimen

The higher incidence of the Philadelphia chromosome–like gene-expression signature among the AYA population may have contributed to the lower rate of no minimal residual disease in the current study, the study authors noted.

The lower rate of patients with no minimal residual disease after induction therapy also emphasizes “the need to consider the addition of new agents that might overcome treatment resistance,” the authors wrote. An example of this approach, they went on, is a clinical trial testing the addition of a targeted therapy called inotuzumab ozogamicin to the 10403 backbone in AYA patients.

Preliminary results from the trial have been presented at scientific meetings in the past, so many pediatric oncologists are aware of the work, though some medical oncologists in community settings may not be familiar with the findings, Seibel said.

“We’ve been waiting for the final results,” she continued. “It’s important to make sure that medical oncologists are aware of this study so that they don’t use the adult-based protocols for patients in this age group.”

Meanwhile, as the trial involving inotuzumab ozogamicin illustrates, researchers are building on the current study to further improve outcomes.

“There’s been tremendous progress in the treatment of ALL,” said Stock. “But we still have challenges ahead in terms of further improving survival and decreasing side effects for young adults with the disease.”

She added: “Our next generation of trials are already aiming towards these goals.”