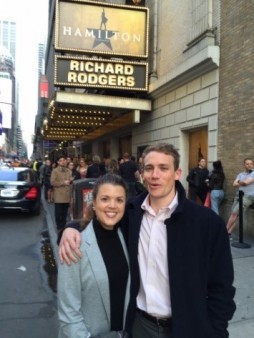 Damon Runyon’s Broadway Tickets and Gift Certificates for the Holidays!

Some of our most loyal customers, like Rocco Staino, have been purchasing their Broadway tickets through us for years or even decades. Mr. Staino is the retired director of the Keefe Library of the North Salem School District in New York, and a contributing editor for School Library Journal and also writes for the Huffington Post.

His daughter Julianne and son-in-law John are both Broadway fans, and as their first wedding anniversary approached this spring Rocco and his wife thought a special gift was in order.

“My wife wanted to get Julianne and John tickets to Hamilton and surprisingly we were able to get them through the Damon Runyon Broadway Ticket Service for their exact anniversary date, May 2,” said Mr. Staino.

Broadway theaters reserve premier house seats for the Foundation for nearly every performance. Tickets become available on the first business day of each month for the following month’s shows. Our Broadway Ticket Service charges double the box office price for each ticket, half of which is used to pay the theater. The other half is a tax-deductible donation to the Foundation.

“We’re thrilled to be able to offer great seats for great Broadway performances,” said Lorraine Egan, President and Chief Executive Officer of the Damon Runyon Cancer Research Foundation. “And loyal customers like the Stainos really enjoy knowing they are supporting a cause that affects everyone.”

To learn more about the Damon Runyon Broadway Tickets Service and our gift certificates please visit damonrunyon.org or call (212) 455-0550 between 9 am and 5 pm Eastern Time, Monday through Friday.