I’m really glad that I was able to get the retest done before my appointment with the doctor. It certainly will make for an interesting discussion.

My last PSA test on 4 February showed a 50% drop in my value compared to the previous test in September 2019, which is a major, unexplained swing considering that I haven’t been doing treatments of any type to lower my PSA. It just didn’t sit right with me, so I asked for a retest.

I went in on 20 February for the retest, and the PSA came back at 0.16 ng/ml, exactly where it was in September 2019. (At least that’s the silver lining in the cloud: it didn’t go even higher.) 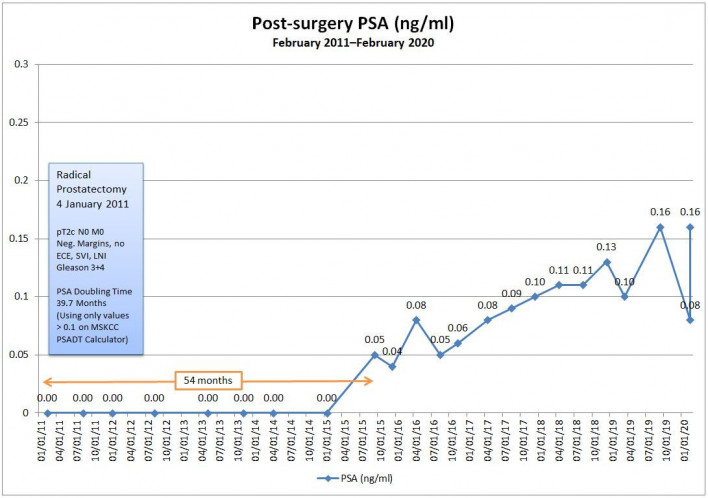 We’ll probably never get a good explanation for the dip in my PSA earlier this month, and I guess that’s just part of dealing with this beast. I’m going to leave the errant data point on my chart just to show how wacky this can be at times.

The one thing that this has done, though, is drive my PSA Doubling Time down to 39.7 months according to the Memorial Sloan-Kettering PSADT Calculator (excluding the 0.08 reading). That’s still a very good number, but its downward trend over time is becoming more concerning.

I’m really glad that I was able to get the retest done before my appointment with the doctor on Tuesday. It certainly will make for an interesting discussion.