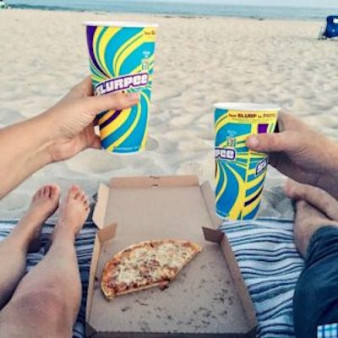 Falling in Love with Cancer (Wait … Not WITH Cancer, While Having Cancer … You Get It).

I remember the day I swiped right.

Yes, I was on Tinder. What else does a 31-year-old woman that just ended a nearly decade-long relationship do to meet new people? Most of my friends are married with kids. Their friends are married with kids. Times are tough when you’re a late-dating-bloomer, gone are the days of having a vast pool of singles to wade through and a group of equally-single friends to dive in with. So I went to the Interwebs. And honestly…it was fun.

It was a random Friday evening and I was perusing the Tinder real estate when he popped up. Beard? Check. Great smile? Check. Funny profile? Check. Age: 25. Oooooooo, too young.

I started to drag my finger left and move on, but stopped myself. I hesitated, then threw my thumb to the right. I know this is going to sound completely insane, but — I swear to God, guys — when I did it, I literally thought, ‘I’m pretty sure that’s going to change my life…’ (ok, reading that back, I feel like a pathetic character in a rom-com, but whatever. It worked out). His first message to me was, “Did you duck-face so hard you turned into a fish?” (a reference to one of my profile pictures). It wasn’t a line or cliché, which was a refreshing change. I’m a girl that really values wit. Our DMs flew back and forth easily. Within hours, we ditched the app and progressed to texting about my sad, single-girl-on-a-budget frozen pizza cuisine that turned into an idea to have a 7-Eleven pizza picnic first date. As soon as possible. Meaning, Monday.

Up until this point, I had never seriously considered meeting anyone in person off of Tinder. It was fun to chat, but I really left it at that. This one was different though. After hours of texting, it just…made sense to have a 7-11 picnic with this guy.

I rolled up to the convenience store and peered through the windows. There he was, at the counter looking just like he did in his profile (phew). I opened the door and walked towards him, all the while trying to decide if it would be weird if I offered to split the cost of $2 pizza (I opted to pick up dessert instead: a pint of Ben and Jerry’s). We drove to the beach, threw a blanket down, and he pulls out Slurpee cups, a bottle of Sauvignon Blanc and silverware. The sun went down, we stayed there. The beach became deserted, we stayed there. We finally stopped talking at midnight.

When I got home, I danced in my kitchen with sandy feet and the melted pint of Ben and Jerry’s.

This post originally appeared on Keeping Cancer Classy on April 24, 2018. It is republished with permission.