MRI scan of a person with a BRAF-positive brain tumor treated with Tafinlar and Mekinist, showing initial tumor shrinkage and subsequent regrowth Adapted from Future Medicine. December 2019. https://doi.org/10.2217/cns-2019-0018. CC BY 4.0

The combination of target drugs Tafinlar-Mekinist is approved for nearly any type of advanced solid tumor that has the BRAF gene mutation.

The Food and Drug Administration (FDA) recently approved the combination of the targeted drugs dabrafenib (Tafinlar) and trametinib (Mekinist) for the treatment of people with nearly any type of advanced solid tumor that has a specific mutation in a gene called BRAF.

This mutation, known as BRAF V600E, can increase the growth and spread of cancer cells.

The accelerated approval, announced on June 22, covers adults and children 6 years of age or older with BRAF V600E-positive tumors that cannot be removed by surgery or have spread to another part of the body (metastasized).

FDA previously approved the dabrafenib–trametinib combination for the treatment of people with advanced forms of specific cancers whose tumors have the BRAF V600E mutation, including non-small cell lung cancer, melanoma, and anaplastic thyroid cancer.

Many patients with these and other cancers have their tumors tested for certain cancer-related genetic changes to help guide their treatment choices. For example, BRAF V600E mutations are found in nearly half of people with melanoma.

“Many types of metastatic cancers are tested for BRAF mutations, and the FDA approval is one more reason to have this testing,” said Lyndsay Harris, M.D., who leads NCI’s Cancer Diagnosis Program. She is also a lead investigator with NCI-MATCH, one of the clinical trials that led to the new approval.

Results from three clinical trials, including two with adult patients and one with pediatric patients, provided the data for the approval. Some trial participants had rare cancers, such as biliary tract cancer, ovarian cancer, and glioma (a type of brain cancer). The trials did not include patients with colorectal cancer, which is known to be resistant to the combination therapy. 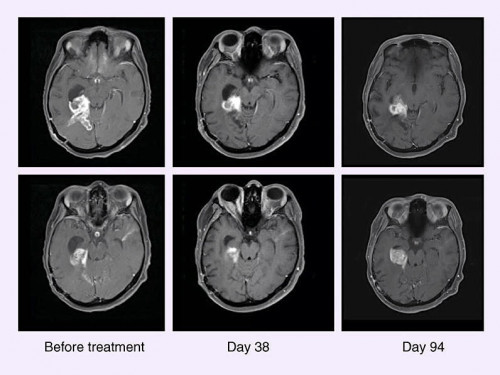 The new approval expands the number of treatments approved for solid tumors anywhere in the body. These “tumor-agnostic” therapies may be used to treat any cancer that has the specific molecular alterations or biomarkers targeted by the medicines.

Tumors that initially respond to dabrafenib alone may develop resistance to the therapy by activating signals from the MEK protein. Combing dabrafenib and trametinib may prevent tumors from using this escape mechanism.

The drug combination was evaluated in the NCI-MATCH trial. This study has enrolled approximately 6,000 patients based on the molecular features of their tumors rather than where in the body the tumors arose.

The FDA approval was based in part on results from adult patients with the BRAF V600E mutation enrolled in a substudy of NCI-MATCH. Participants had different tumor types, including ovarian cancers, gastrointestinal cancers, and cancers of the central nervous system.

“An important finding of our study was that several rare types of cancer responded to the drug combination, including ovarian cancers, which are difficult to treat,” said Dr. Harris. “Some of the patients had very long responses, lasting for years.”

In a study published in 2020, researchers conducting the ROAR trial wrote that routine testing for the BRAF V600E mutation should be considered for all patients with biliary tract cancer.

The ROAR and NCI-MATCH studies included a total of 131 adult patients with 24 types of BRAF V600E mutation-positive tumors. Of this group, 54 (41%) had a partial or complete response to the combination therapy.

The most common side effects of the combination therapy in adults included fever, fatigue, nausea, and rash. “The treatment was well tolerated,” Dr. Harris said. “The side effects were identical to those reported in previous trials of the dabrafenib–trametinib combination.”

Among the 36 patients in the pediatric trial that contributed data to the FDA’s analysis, the overall tumor response rate was 25%. For most of these patients, their responses lasted at least 6 months, and 44% had responses that lasted at least 24 months.

Sponsored by Novartis, the pediatric trial included patients with low-grade gliomas and Langerhans cell histiocytosis that had come back after initial treatment or resisted therapy. The side effects were similar to those observed in the ROAR and NCI-MATCH trials.

NCI-MATCH and ROAR are both known as basket trials. Such clinical trials enroll patients with different types of tumors and assign them to groups, or baskets, based on criteria such as the molecular features of their tumors.

For many rare cancers, it can be challenging to develop clinical trials that recruit enough patients to show a benefit from certain therapies, particularly for treatments that target tumors with uncommon genetic alterations.

Basket trials offer a potential solution to this problem by allowing researchers to efficiently study treatments in multiple rare cancers, according to April Salama, M.D., who directs the melanoma program at the Duke Cancer Institute and co-led the NCI-MATCH substudy testing the dabrafenib–trametinib combination.

Nearly 75% of the patients in the NCI-MATCH substudy experienced a “clinically meaningful benefit” from the combination therapy, Dr. Salama said. Most of the patients had previously received multiple therapies and had few additional treatment options.

“As we learn more about the molecular underpinnings of cancer, [basket trials] will continue to become more common,” Dr. Salama predicted. “These studies are complicated to conduct, but they may also be one of the best ways to bring new treatment options to the clinic.”