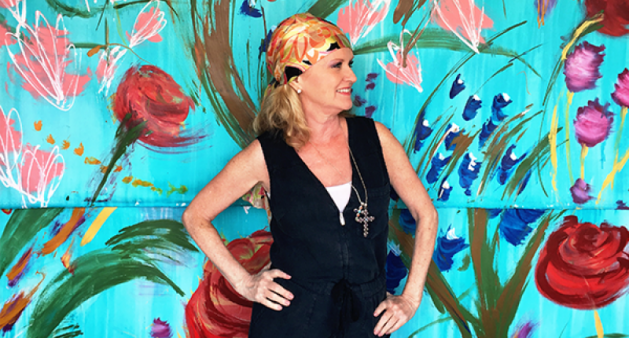 Fighting For Her Life With a Clinical trial

The results of the study are huge and challenge the standard of care.

Colleen Wittoesch was a regular at MD Anderson Cancer Center. She came to the hospital every week to volunteer and spend time with patients and families in the melanoma clinic for going on seven years. “I met so many great people — and tried to make them feel welcome,” says Colleen. “At the beginning we had so few treatments. A lot of people died because there was so little that could be done — and then the magic of immunotherapy happened.”

Little did Colleen know that in March of 2016 she too would walk through the clinic doors as a patient. “It was surreal, this was a place where I had made great relationships with the patients, doctors, and staff.” But would immunotherapy’s “magic” work for her, too?

Colleen was incoherent — talking and texting gibberish and stumbling around the house. Something was terribly wrong. Her daughters took her to the local emergency department where doctors found a dozen lesions in her brain, three of which were pressuring the brain itself.

“I knew, I just knew, that it was cancer,” says Colleen. “I could tell on my surgeons face at the local hospital that they didn’t expect me to make it. I was terrified, but kept up a brave face for my girls. All that ran through my mind was that I wanted a chance to fight.”

The surgeon successfully removed three of the largest tumors. The other lesions were still small enough that they weren’t yet causing harm. As she recovered, Colleen learned that she was facing melanoma of unknown primary origin, meaning that doctors couldn’t locate a ‘telltale mole’ anywhere on her skin.

“At first we were just relieved that it wasn’t pancreatic cancer, but as we learned more about melanoma it felt like the other shoe dropped,” says Colleen. “Stage 4 melanoma that has metastasized to the brain was a beast. I knew I was in a fight for my life.”

Three weeks after her surgery, Colleen walked through the doors of the MD Anderson Cancer Center Melanoma Clinic, this time as a patient.

From Volunteer to Patient

Brain metastasis (mets) is a serious challenge for Stage 4 melanoma patients. Nearly 40% of patients with metastatic melanoma have brain mets at diagnosis, and those with brain mets have an average survival of only 4 months. Patients with active brain mets are frequently excluded from clinical trials due to a variety of concerns, including the belief that these patients will have uniquely worse reactions that will negatively weigh against otherwise positive clinical benefits. Doctors also worry that the brain, protected by what is called the blood-brain barrier, wouldn’t respond to systemic therapy. Research focused on better treating these patients is a clear unmet need in the field.

Knowing this, when her MD Anderson oncologist Rodabe Amaria, MD, ran through her treatment options Colleen instantly knew she wanted to enroll in a clinical trial. Amaria suggested a Phase 2 trial that was studying the effect of combination immunotherapy — ipilimumab + nivolumab — specifically on melanoma brain mets. The combination had proven itself in melanoma elsewhere in the body and earned FDA approval in 2015, however it had never been specifically studied among patients with brain mets, until now.

“I felt like enrolling in a clinical trial was my best bet to fight melanoma,” says Colleen.

But there were no guarantees.

The ipilimumab + nivolumab combination can be difficult for patients, while more effective than either drug on its own it also carries significant risk of side effects. For Colleen, she would get an infusion every two weeks. The first four months she’d receive both drugs, then she’d continue to receive nivolumab as a single agent for another 20 months.

“I had major headaches and months of what felt like the flu and rashes that just wouldn’t go away,” says Colleen. “I had good and bad days — but I also was confident that it was working.”

Colleen’s confidence in the treatment proved to be right just three months into the combination therapy. Miraculously, the tumors were gone. Coleen was a complete responder — a complete response that continues to this day.

Colleen wasn’t the only patient enrolled in the trial to respond. The results of the study were published in the New England Journal of Medicine in August — and are truly practice-changing for the field at large.

“Historically, fewer than 20 percent of these patients survive for one year. With the immunotherapy combination in this study, 82 percent have survived to one year,” says study leader Hussein Tawbi, MD, PhD, associate professor of melanoma medical oncology.

The study followed 94 patients with a median follow up of 14 months. Among these patients, 57% saw clinical benefit and 26% — including Colleen — were complete responders. This is very similar to the rate of clinical benefit seen outside of the brain.

Just over half of patients, 55%, experienced treatment related grade 3 or 4 adverse events (severe or life-threatening side effects) – in line with results seen from previous studies.

The results of the study are huge and challenge the standard of care in which patients receive surgery or radiation therapy — followed by immunotherapy or targeted therapy. The study supports combination immunotherapy as first-line treatment for melanoma patients with brain mets.

The New Normal After Melanoma

For Colleen, the last three years “are like a speed bump.”

“Things have changed, but I’m still here,” says Colleen. “I wake up every day so grateful for the opportunity. No, it’s not fair — but sometimes embracing change is the best thing you can do for yourself.”