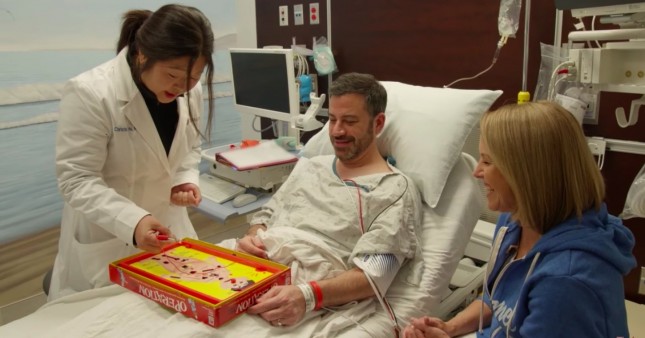 Jimmy Kimmel turned 50 in November 2017, which meant he was ready for his first colonoscopy. Katie Couric took the comedian — and the Jimmy Kimmel Live cameras — to Cedars-Sinai hospital for the procedure.

March is Colorectal Cancer Awareness Month, and Couric has been raising awareness of the disease for nearly two decades, since her husband Jay Monahan died of colon cancer in 1998 at just age 42. Couric televised her first colonoscopy on The Today Show in 2000, which caused a 20 percent increase incolonoscopies in the U.S., something medical professionals dubbed the “Couric Effect.” Ten years later, she walked CBS’s Early Show co-anchor Harry Smith through the first live televised colonoscopy.

Kimmel came through just fine. Christina Ha, MD, of Cedars-Sinai Hospital’s Division of Digestive Diseases, who performed his colonoscopy, walked him — and the audience — through the results. “This is what a healthy colon should look like,” said Ha, who told Kimmel he wouldn’t need another procedure for 10 years. Couric said she’s looking forward to the “Kimmel Effect” on the number of colonoscopies performed in the U.S.; experts recommend African Americans undergo their first procedure at age 45, and other adults at age 50.

Colon cancer is the second most common cause of cancer death in the U.S., men and women combined. Watch Couric prep Kimmel for his colonoscopy here, and find out more about Couric’s work to prevent colon cancer with Stand Up to Cancer here.