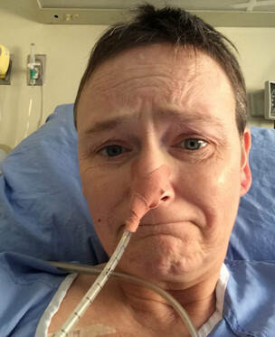 I spent days with a nasal gastric tube that siphons off the build-up of bile — a bleak contrivance.

Massive Surgery and The Who’s “Bargain”

If I can obtain my humanity again, every second of this is worth it.

I did it. I endured a massive surgery to repair the horrible complications arising from my cancer surgery last year.

My surgeon was the world-famous pelvic reconstruction urologist Dr. Sender Herschorn of Sunnybrook Hospital in Toronto. Essentially, he was confronted with a mass of pelvic organs fused together by radiated scar tissue. He patiently spent 13 hours methodically separating the bladder from the vagina and the bowel. Once they were apart, he was easily able to repair the defects. He used other tissue (omentum) to fashion an interposition graft between the organs so they will remain safe and independent. He accidentally perforated the bowel at one point but stitched that up. Remarkably, I remained strong and stable throughout this very long procedure, and had virtually no blood loss.

But the bowel was grumpy after all that handling,and began to swell after a few days. Remember from my book The Cancer Olympics, “Efficiently Vomiting Robin”? She made another appearance. I spent days with a nasal gastric tube that siphons off the build-up of bile. An NG tubes makes a person more comfortable, as the fluid pressure creates terrible pain and nausea — but they are bleak contrivances. You can eat or drink nothing. The tube makes you gag relentlessly. The suction sound howls all night and day, making sleep impossible.

Simultaneously, an IV misplacement led to me becoming “continuously interstitial” — meaning that my first my arm and then the rest of my body became inflated by misplaced fluid. They could not access a vein to replace the botched IV, so swollen was I. Within hours I looked like the stay-puffed marshmallow man from Ghostbusters. So the day after a huge surgery, I had no proper pain control, no proper hydration, and many futile punctures. I insisted that they use my chemotherapy portacath. They pushed back, saying it was “against policy” because they did not think it was well situated and they had not implanted it. The arguing went on all day while I worsened and suffered. Finally, a no-nonsense IV nurse just pushed everyone aside and accessed the port. It worked immediately.

As if that was not enough, the epidural they attempted also went awry, resulting in nerve damage that has resulted in a totally numb, painful, and dysfunctional left leg. It is unclear if it will resolve with time.

But despite all of that — every broken and agonized and miserable moment — it has all been worth it. If I can obtain my humanity again, leave behind my freakish defects, become a proper spouse once more, every second of this is worth it. The prospect of normalcy, even a modest one, is overjoying to me.

So today’s song is “Bargain” by The Who, from their banner 1971 album Who’s Next. That album has so many awards I cannot even start to describe them. In this song, the emotional soaring voice of Roger Daltrey projects a powerful drive and longing for a craved outcome. Some say it is about connecting with love, others with God. I choose it today as it so well expresses my determination to take back my life and my health.