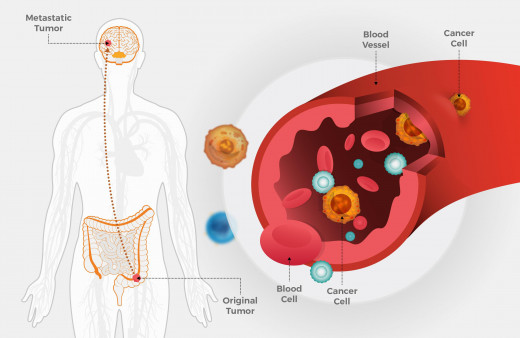 Colorectal cancer cells can break away from the original tumor and travel through the blood or lymph system to other parts of the body, including the liver, lungs and brain. National Cancer Institute

Metastatic Colorectal Cancer May Spread Early in the Disease

Many colorectal cancers are likely to have spread from the site where they first formed to other parts of the body long before the original tumor can be detected by current screening tests, new study results suggest.

Most cancer researchers have assumed that the spread, or metastasis, of tumors typically occurs later in the disease process. The general idea has been that as tumors grow and cancer cells accumulate more and more genetic changes, or mutations, some cells acquire the ability to move from the primary tumor into the bloodstream or lymphatic system, to migrate to a distant location in the body, and to grow into tumors in the new location.

But that’s not what Christina Curtis, PhD, of Stanford University School of Medicine, and her team found. Rather, their genomic analysis of both original, or primary, colorectal tumors and metastatic tumors from the same patients, coupled with computer simulations, led them to conclude that colorectal cancer can spread very soon after the original tumor has developed—and maybe years before the disease is diagnosed.

Their findings, published June 17 in Nature Genetics, open a window for very early detection of metastatic colorectal cancer and could eventually help doctors identify those patients who need more aggressive systemic treatments, such as chemotherapy given after surgical removal of the tumor, Curtis said.

Treatments that specifically target metastatic tumors do not yet exist, said Nancy Boudreau, PhD, chief of the Tumor Metastasis Branch in NCI’s Division of Cancer Biology. Metastatic cancer is notoriously challenging to treat, and metastasis accounts for most cancer-related deaths.

The NCI-funded study is significant, Boudreau said, because “it shows, for the first time in patients, that some tumor cells are capable of metastasizing from the get-go.” And the new findings may provide clues on how to target and eliminate such cells in the bloodstream, she said.

“There has been a longstanding debate about when metastasis occurs,” Curtis said. Studying the metastatic process in humans is challenging because researchers can’t observe the process directly, she noted.

To gain insights into the genetic changes involved in metastasis, the team first compared the patterns of genetic mutations between the primary tumors of 21 patients with metastatic colorectal cancer and metastatic tumors in the liver or brain from the same patients.

These findings suggested that most metastatic colorectal cancers are started by a single cell, or a small group of genetically similar cells, that break off from the original tumor early in its development, the authors wrote.

The fact that the primary and metastatic tumors had many of the same driver mutations “suggests that there is overlap between the drivers necessary for tumor initiation and the drivers of metastasis,” Curtis said.

“That’s an important observation, because the drivers of metastasis have been elusive,” she continued. And identifying mutations that fuel metastasis could facilitate development of therapies that target and eliminate metastatic cells.

Some Colorectal Tumors Are Born to Be Bad

To get a better handle on the timing of metastasis, the team developed a computer model to simulate the evolution of millions of virtual tumors under different conditions.

“We could then compare the simulated data with the observed patient data using various statistical techniques,” Curtis explained.

The modeling data indicated that metastasis begins very early during tumor development—when the primary tumor is smaller than the tip of a sharpened pencil.

In other words, Curtis said, some tumors may be "born to be bad.”

The team next investigated whether the results from their small set of paired samples of primary and metastatic tumors from patients could be extended to a larger number of patients.

“Those genetic changes are present in every cell of the tumor and are happening quite early, which suggests that they could be used as markers to identify patients at higher risk of metastasis,” Curtis said.

If confirmed in future studies, this information could potentially be used to guide treatment decisions, she said.

“Our findings highlight the need for earlier detection of cancer,” Curtis said.

Cancer researchers are already exploring noninvasive methods that could detect cancer at an early stage by analyzing tumor cells, or pieces of DNA from tumor cells, that have escaped from the original tumor and are found in the blood.

This approach, often called a liquid biopsy, could help doctors identify patients at risk for metastasis and treat them with chemotherapy or targeted therapies, if available, to try to eliminate metastatic cells that have spread in the body before surgery, Boudreau said.

“This is early-stage research, but it gives us the first quantitative evidence that metastastasis can occur exceedingly early, while also providing clues as to how to identify individuals who are at risk of metastasis,” Curtis said.

Before the new results can be used to guide patient care, the researchers “will need to look at a much larger group of patients, to see how consistent their findings are,” Boudreau said.

Indeed, Curtis said, her team plans to extend their analysis to more patients. The biggest task, she said, will be to follow patients with earlier-stage colorectal cancer and investigate “whether these specific combinations of mutations are indeed predictive of disease progression. And then, if that’s true, we will have a rationale to go forward with clinical studies.”

The team is also applying their new computational model to other tumor types, such as lung and breast cancer, she said.

Finally, Curtis noted, it will also be important to “know what normal is” across people of different ethnicities, genders, and age groups, and in those with various co-occurring diseases or conditions, so that doctors can distinguish harmless genetic changes from those that are associated with metastasis.