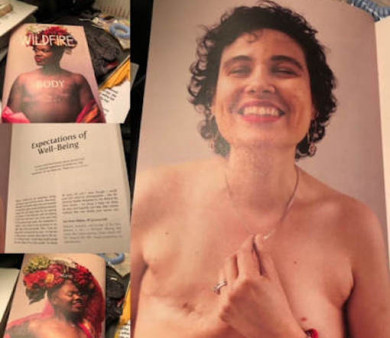 Moms That Should Model ... or How Breast Cancer Led to Me Being a ’Covergirl’

After cancer, I find myself doing this less and being more “content” with my body, my face, my weird facial expressions and you know, ME.

Recently, I became a magazine model. Did I ever think I would model? NO — not even when I had an undeveloped teenager’s mind did I ever ever think I would or COULD model. When I look back now, I realize I was really beautiful but I always felt NOT beautiful. I compared myself to everyone and anyone — I recall like yesterday being about 12 (so almost my daughter’s age now) and watching Janet Jackson’s “That’s the Way Love Goes” music video on MTV (you know, when MTV used to play music videos) and feeling just huge and hideous and wishing I could look as trim and fit and as beautiful as she did.

I realize now that she had a team of people to make her look the way she did in that video and that it is insane for girls women to compare ourselves to stars, musicians and now, IG models and reality TV stars.

Most photos you see out in the world for advertising purposes are photoshopped and airbrushed and videos are also treated after the shooting before we see them so we really should NOT compare ourselves but it is what we do.

After cancer, I find myself doing this less and being more “content” with my body, my face, my weird facial expressions and you know, ME. I also am less fearful of like anything (IDGAF) and just doing things way outside my comfort zone (exhibitionist).

When I first shared with some friends that I would be posing topless and showing body positivity to the point of being a 41-year-old (so middle-aged) one-breasted woman, some folks were shocked and wondering why I felt this need to show my body NOW. I mean, do not get me wrong, as a young lady, I wore string bikinis and “sexy” clothes but as I got older, I became more conservative and though I would show cleavage, I would not show too much and never ever posed naked — I mean, I was a professor / teacher and an executive — we never want to be found with naked pics out there because then it becomes the front page of the New York Post…

So when my friends pushed back, I explained how it was so important to me to show that even though my body has been mutilated and I have lost a piece of what is considered “feminine” by chopping off that tit, I am still happy with my body and sexy in my own way. I would share more about sex but I am married and NO ONE wants to know about married people’s sex life — if I were single and swiping right on Tinder, everyone would be down with it but because I am married, it is icky… lol.

I am also too prudish to write about that stuff anyway — but I am naked in this month’s amazing Body Issue for Wildfire Magazine. This magazine is all about breast cancer and a portion of the proceeds are donated to cancer charities. The magazine has been in print since 2015 AD FREE and showcases the true story of breast cancer with images, stories, coloring inserts and more.

My lovely photo taken by the amazing Sophie Mayanne of Behind the Scars was picked to be put in the magazine and check it out — it is a FULL-PAGE image and on the next page is a little bit about my body image and my post-mastectomy experience as well as a listing of my nonprofit, too!

If you have the time and are interested in an amazingly crafted with love magazine about our experiences and life with breast cancer, sign up to get copies here — you can get digital copies or printed ones! It is a great resource to find your tribe, to learn about things in the community and to give back, all at the same time!

The magazine is AD-FREE and a portion of each new subscription is donated to MBC/Stage IV research. WILDFIRE supports METAvivor and The Cancer Couch Foundation.