Facing any illness in general or cancer in particular as a single person poses its own set of unique challenges.

My mother was fiercely independent right up to the final weeks of her life. Or at least she wanted to remain as independent as she could for as long as she could, and she generally succeeded in that.

Let’s say that this apple didn’t fall far from that tree. 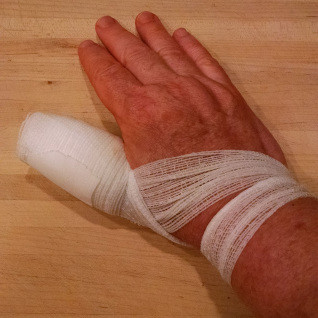 Last week I had a cyst removed from my right thumb (I’m right-handed). It started out quite small over a year ago and had grown to the size of a small pea just below my thumbnail. It wasn’t painful, but it was beginning to change how my thumbnail grew and, because it was sticking out from the surface of my thumb, it would get abraded if I rubbed it against things. It was time to go.

I drove myself to the hospital with the understanding that this would likely be done with a local anesthesia, but I needed to be prepared in case they needed to give me stronger happy juice during the procedure. Let’s just say that the hospital over-achieved and knocked me out for the surgery.

Thanks to the nerve blockers used in my arm, my hand was flopping around like a dead fish, completely uncontrollable and completely useless. (Much like in this classic Tim Conway / Harvey Korman sketch.) When it came time to go home, I had to have the nurse button my shirt and tie my shoes so I could leave the hospital. So much for independence.

Of course, that meant that I couldn’t drive myself home. Thankfully, I had given two friends a head’s up that I may need a ride and had each of them on standby waiting for a call from me. Tom was gracious enough to chauffeur me home during a rainy rush hour in San Diego. (San Diegans lose their minds when it comes to driving in the rain because it happens so infrequently, so I really appreciate his navigating through that mess.)

The next morning with full control of my hand and minimal pain from the incision, I had to retrieve my car from the hospital’s parking garage 31 miles / 50 km from my house. Being stubborn and wanting to regain some independence, I took three buses and two trolleys (light rail) and two hours and forty minutes to get to the hospital. But I got my car on my own. Woo-hoo! (Although it’s been almost a week and I still haven’t untied the nurse’s knots on my shoes—I’ve been slipping my feet in and out of them all week long.)

Some of you may recall that several posts ago, I talked about relationships and how disillusioned I was with some of them. Some reflection since that post and this incident have recalibrated me to a degree.

Facing any illness in general or cancer in particular as a single person poses its own set of unique challenges. Obviously, I have to impose on the lives of those around me to meet some of my needs if I can’t do things for myself. I hate having to do that (stubborn independent streak) but obviously know that it’s okay to swallow my pride and do so when the time comes.

This incident highlighted for me the handful of people that I would feel comfortable approaching for assistance, and that’s a good thing. (Keep in mind that my family is half a continent away in Chicago, so something major would have to happen for them to be of assistance. Either I go there or one of them comes to San Diego.)

I would like that list of potential helpers to be a bit longer just to spread the burden among the lot of them, and that’s where some of my questions about current relationships still come into play. Relationships that were fostered over decades before I joined social media (i.e., Facebook), seem to have been reduced to mere “likes” from people who used to call, email, or visit. Will I be able to call on them and rely on them if and when the need arises? In most cases, I should be able to count on them, but time will tell.

With luck, any need for physical assistance will be years away and I’ll have time to sort things out. In the meantime, I won’t burn any bridges and will work to ensure that I’m holding up my end of the relationship.