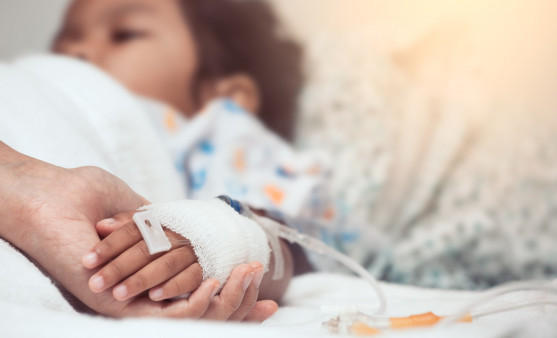 Nelarabine Improves Survival for Some Young People With Leukemia

“These are the best outcomes reported to date in a Children’s Oncology Group trial for children with this cancer,” said the study’s lead author.

The trial was the largest ever conducted for patients with newly diagnosed T-ALL and T-cell lymphoblastic lymphoma (T-LL).

“These results are practice changing and identify a new standard treatment for children with T-ALL,” said Malcolm Smith, MD, PhD, of NCI’s Division of Cancer Treatment and Diagnosis, which helps fund COG.

ALL is the most common cancer in children, and T-ALL represents about 10 percent to 15 percent of all childhood ALL diagnoses.

An improvement in 4-year disease-free survival is noteworthy because most relapses of T-cell cancers occur in the first 3 or 4 years after diagnosis, said lead author Kimberly Dunsmore, MD, of Virginia Tech Carilion School of Medicine.

Dunsmore presented the new findings at a May 16 press briefing ahead of the 2018 American Society of Clinical Oncology annual meeting in Chicago.

All patients in the trial received standard chemotherapy as well as radiation therapy to the head to prevent or treat cancer that may have spread (metastasize) to the brain or central nervous system.

First, the trial compared two ways of giving the drug methotrexate (Trexall, Rheumatrex) as part of the interim maintenance phase of chemotherapy treatment. Study participants were randomly assigned to receive either high-dose methotrexate (which requires hospitalization and additional medication to reduce side effects) or escalating-dose methotrexate (which involves starting with a low dose and gradually increasing the dose over time and can be done on an outpatient basis).

Patients in the trial who received both nelarabine and escalating-dose methotrexate had the best outcomes. This group of patients had a 4-year disease-free survival rate of 91 percent, which “is spectacular for pediatric T-ALL,” Smith said.

Although nelarabine can have serious side effects, particularly in the nervous system (neurotoxicity), adverse side effects in general were not markedly different between the four treatment groups in the trial. And neurotoxicity, including peripheral and sensory neuropathy, occurred in 6 percent to 9 percent of participants in all four treatment groups, Dunsmore said.

The Food and Drug Administration (FDA) granted accelerated approval to nelarabine in 2005 for the treatment of T-cell leukemia or lymphoma that has not gotten better with other treatments or has recurred after earlier chemotherapy.

That provisional approval was based on results of two earlier NCI-funded phase 2 clinical trials, one in children and one in adults, Smith said. The COG trial was designed in the hopes of providing evidence to support a full FDA approval for nelarabine in newly diagnosed patients, he explained.

A Dramatic Improvement in Outcomes Since the Early 1990s

Furthermore, 90 percent of all patients in the trial, regardless of which treatment they received, were still alive after 4 years.

“These are the best outcomes reported to date in a COG trial for children with this cancer, and they are equivalent to or better than outcomes that have been reported by [other clinical trial] groups throughout the world,” Dunsmore said.

Until recently, the best 4- to 5-year disease-free survival rates for childhood T-ALL hovered around 80 percent.

Although the patients in the COG trial received lower doses of radiation than were used in the past, most oncologists are moving away from using any radiation to treat ALL, when possible, to avoid the risk of late effects, Smith said. These effects can include cognitive problems, learning disabilities, and hormonal problems, as well as new cancers that develop in the irradiated area.

“Some clinicians are already using nelarabine similarly to the way it was used in this trial and omitting the radiation,” Smith said. But, he added, “we’ll need more research before we can ensure that a nelarabine treatment regimen without cranial irradiation is an appropriate standard of care.”

The COG researchers plan to follow patients in the trial for several more years, “as we do for all COG studies, so we can make sure patients are maintaining the results that we’ve seen and to try to understand what future complications may arise,” Dunsmore said.

This post was originally published on June 14, 2018, by the National Cancer Institute. It is republished with permission.