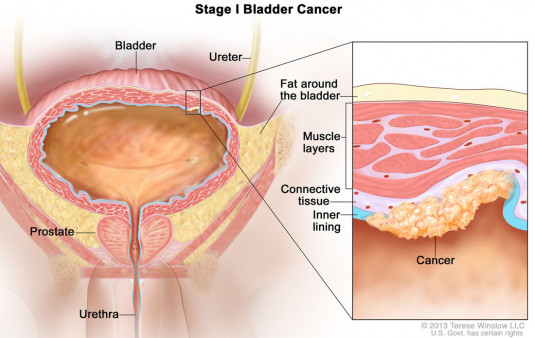 Low-grade, or stage I, bladder cancer has not invaded the muscle layers of the bladder. National Cancer Institute

Flushing the bladder with the chemotherapy drug gemcitabine (Gemzar) after tumors have been removed surgically may reduce the risk of the cancer returning, according to the results of a large clinical trial.

In the trial, patients with low-grade nonmuscle-invasive bladder cancer who received a single dose of gemcitabine in the bladder through a catheter after surgery were much less likely to experience a recurrence of the disease within 4 years than patients who received a placebo.

“This surgery is one of the most common operations done in urology,” said Edward Messing, MD, of the University of Rochester School of Medicine and Dentistry, who led the trial. “It’s expensive, and it is difficult for many patients with bladder cancer, who tend to be older and have other health conditions.”

Among all of the 406 patients in the clinical trial, the use of gemcitabine after surgery reduced the rate of the cancer returning. Over 4 years, the recurrence rate was 35 percent in the gemcitabine group, compared with 47 percent in the placebo group, the researchers reported in JAMA on May 8.

Participants were recruited and randomly assigned to a treatment group prior to undergoing surgery, which is needed to determine whether a patient has low-grade or high-grade disease. Over the course of the trial, the researchers determined that 215 patients had low-grade disease.

“Based on these results,” Messing said, “the addition of gemcitabine after surgery should be the new standard of care for patients with low-grade bladder cancer.”

An editorial accompanying the study agreed. The gemcitabine-based approach is a “simple, safe, effective, and affordable innovation in the treatment of bladder cancer,” wrote Matthew Nielsen, MD, director of Urologic Oncology at the University of North Carolina School of Medicine, and several colleagues.

Another Option for Reducing Recurrences

Other studies have demonstrated that giving patients with low-grade bladder cancer the chemotherapy drug mitomycin C through a catheter following surgery can reduce the chance of a recurrence. These studies led professional groups in the United States and Europe to recommend this approach for patients with low-grade disease that has not invaded the muscle.

In the United States, however, few patients receive this treatment, in part because of concerns about the side effects of mitomycin C, as well as the availability and cost of the drug, noted Messing. Mitomycin C can be toxic if it leaks out of the bladder through a hole, and the drug can also cause severe rashes when it comes in contact with skin.

Gemcitabine, on the other hand, is a well-tolerated, readily available drug that “comes at relatively little cost in terms of side effects or expense,” said Messing. The side effects were similar between the two groups in the trial and were generally manageable, he added.

Some patients with advanced bladder cancer already receive gemcitabine, noted Piyush Agarwal, MD, who heads the Bladder Cancer Section in NCI’s Center for Cancer Research and was not involved in the trial. “So, it makes sense that the drug would be used to treat patients with low-grade bladder cancer.”

By delivering gemcitabine directly into the bladder—a technique called intravesical instillation—the drug can affect cells lining the bladder without causing side effects in other parts of the body, he explained.

Agarwal predicted that the new study would lead to revisions in treatment guidelines to include gemcitabine as an option for reducing recurrences in the patients with low-grade bladder cancer.

For his own patients with low-grade bladder cancer, Agarwal plans to start using gemcitabine after surgery.

When Messing began research on gemcitabine as a possible way to reduce recurrences more than a decade ago, the drug was not widely used for bladder cancer. “We tried to pick an agent that we thought would be safe and effective,” he said.

The researchers decided to compare gemcitabine against placebo rather than mitomycin C, based on studies showing how infrequently patients received some form of chemotherapy following surgery despite guidelines recommending this approach.

“If the new procedure were adopted widely, we could spare patients a lot of suffering from repeated surgeries and save health care costs associated with those surgeries,” Messing said.

“Now that we have the results of the trial,” he went on, “we hope that patients and physicians will embrace this approach to treatment.”

This post was originally published on May 31, 2018, by the National Cancer Institute. It is republished with permission.