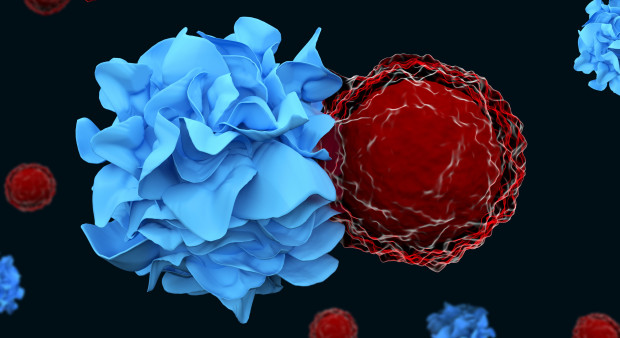 Toward a More Nuanced Understanding of the Anti-Cancer Immune Response

There is more to cancer immunotherapy than cytotoxic T cells.

An effective immune system response requires coordination among many types of immune cells, including CD4+ (helper) T cells, CD8+ (cytotoxic) T cells, and B cells. Helper T cells recognize antigens—identifying molecules on the surface of a pathogen—and release warning signals. These signals activate cytotoxic T cells, which kill the infected or cancerous cells, and B cells, which produce antibodies to attack the pathogen directly.

When discussing cancer immunotherapy, we tend to focus on cytotoxic T cells. These are the T cells that immunotherapy drugs target, suppressing their “brakes” to unleash them on cancer cells. But research indicates that helper T cells and B cells play an important role in anti-cancer immunity as well, and a better understanding of their roles could lead to more effective immunotherapy approaches.

At Yale University, former Damon Runyon Fellow Nikhil Joshi, PhD, is investigating the role of a subset of helper T cells known as T follicular helper (TFH) cells. Studies have shown that the presence of TFH and B cells correlate with prolonged survival in cancer patients, but exactly how they contribute to anti-cancer immunity is unclear. To find out, Dr. Joshi’s lab created a mouse model of lung cancer in which some tumor cells presented antigens recognizable to both B cells and T cells, and some presented antigens recognizable to T cells only.

Dr. Joshi’s findings illuminate the critical and underappreciated role of B cells and TFH cells in the anti-cancer immune response. They open up a world of new therapeutic opportunities, including personalized vaccines containing antigens recognizable to both B and T cells, or engineered versions of IL-21 that can be combined with existing immunotherapies. It appears cytotoxic T cells, the heavy lifters of anti-cancer immunity, can use all “helpers” they can get.

This research was published in Cell.

This article was originally published by the Damon Runyon Cancer Research Foundation on February 7, 2022. It is republished by permission.