There’s a mouthful for you.

I had seen the term bantered about in one of the online support groups that I participate in, and one of the members posted a link to a video [below] put together by the Prostate Cancer Research Institute featuring Dr. Eugene Kwon from the Mayo Clinic. While this may be old news to some, it was new to me, and it was definitely worth the 29 minutes to watch—I learned a lot.

First, oligo means scant or few, and when cancer metastasizes, it doesn’t metastasize throughout your entire body all at once. It’s not like throwing the switch on the national Christmas tree so your whole body lights up in a scan. It starts small and spreads from there. The hypothesis is that, if you treat those early oligometastatic locations, you are much more likely to have a successful outcome. As Dr. Kwon says, it’s a lot easier to kill something small than it is to kill multiple resistant larger tumors.

Second, imaging technology has now advanced to the point where those oligometastatic sites can be identified for treatment. Interestingly, in Dr. Kwon’s experience, only 30% of the cancer that comes back is found locally in the prostate bed. To me, that is hugely important. (For the remaining cancer, 54% is distant metastases and, in 16% of the cases, the metastases are both distant and local.)

The current standard of care is to start salvage radiation therapy (SRT) without the benefit of advanced imaging, zapping the crap out of the prostate bed, with an apparent seven in ten chance that it won’t be effective. And, as an added bonus, you get those potential life-long side effects from the radiation.

Of course, after (or in conjunction with) SRT is androgen deprivation therapy (ADT). It’s palliative in nature and only prolongs life with even more side effects.

Dr. Kwon asserts that, if you go after those early oligometastatic sites—surgically removing “hot” lymph nodes or spot-radiating affected bones—those treatments can be more curative in nature. Curative is certainly better than palliative.

You can rest assured that I’ll be investigating more of this in the future and discussing it with my doctor in April.

This blog post originally appeared on Dan’s Journey through Prostate Cancer. It is reprinted with permission. 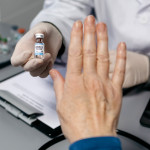