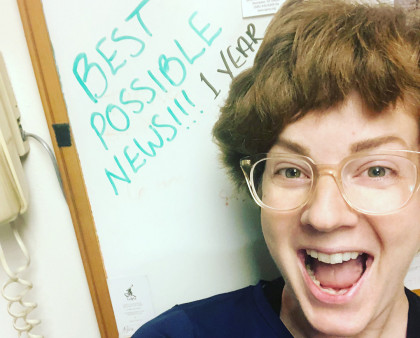 Last year, my surgeon told me that she doesn’t use the words “cancer-free” until 5 years out. But I had a complete pathological response to treatment, no evidence of disease, and it was the best possible news.

I pictured myself becoming this golden statue of my former self. But healing is not linear.

This day came much more quickly than I imagined it would. In my mind I’m still the same bald, bloated, achy, sick woman I was during treatment. Or, it feels like it was just yesterday. But it’s been a year. A whole year since chemo ended, since I sacrificed my breasts, since I was told I’m in remission.

No Evidence of Disease. Best Possible News. I heard those words from my surgeon and I was the happiest I had ever been. I pictured myself becoming this golden statue of my former self. A beacon of victory, of hope. I would make all the right choices. I would eat all the right foods. I would commit to the world’s healthiest lifestyle and never look back. I would be reborn. I am the phoenix, right?

K, well, if I am phoenix, it’s a pretty mediocre one to be honest. Now, I’m not discounting all of the progress/milestones/steps forward I’ve taken. I am proud of SO much that I’ve accomplished in the past year. But am I alone in thinking I would have transformed beyond my recognizable self to become some sort of perfect choice guru?!

I have definitely eaten McDonald’s, consumed Coke Zeros, stuffed my face with cake, drank an entire bottle of red in one go, skipped out on exercise for months, had exactly ZERO plant-based products on my plate, stressed out over nothing, stopped meditating, stopped journaling, lost my way. All of it. I have STRUGGLED this past year. I rose out of the ashes of cancer to find myself making the same mistakes that I swore I would never make again.

Slowly, I’ve been putting the pieces together, and apparently this type of behavior is not entirely uncommon after diagnosis. I’ve heard from others that freedom from active treatment switches something in our minds that can lead us to act like we’re 18 again. Rebellious. Rambunctious. Carefree. A fuck-you to cancer and all it tried to take.

Looking back on this year, I think I definitely fell into that category. I think I struggled a lot more mentally than I ever would have imagined. I started to see a therapist, and we are working to break down the barriers between me and my goals. And we have been making quite a bit of progress.

So, you see, I am proud of myself. For recognizing that maybe my mind needed treatment well after my body did. For hiring a running coach to get my training schedule into shape for this marathon. For implementing healthier recipes into my routine, even if I still partake in the dreaded processed meat every once in awhile. For recognizing that alcohol isn’t a crutch for what happened to me. But it is something to be enjoyed with friends and special occasions. For reflecting and not judging. For moving forward.

Healing is not linear. Apparently the path my phoenix is taking isn’t, either. See you next year.