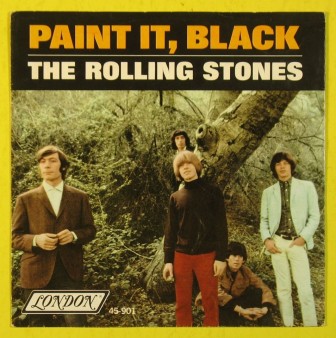 Many of you will remember the song “Paint it Black,” by The Rolling Stones.   Driven by a relentless sitar beat, the singer expresses with anger his desolation over something terrible that happened to a loved one.  In his grief, he wants to see the outside world turned black, to reflect his own darkness.

I see a red door and I want it painted black
No colours anymore, I want them to turn black

I find myself overwhelmed by the same feelings over the past few weeks.   My beloved family doctor “Adam Good,” my rescuer in The Cancer Olympics, has himself been struck down by cancer.   He has had surgery to remove a mass behind his eye and awaits radiation in June.   To show just how caring a doctor he is, he called me at home to strategize over my ever-increasing cancer blood markers – in retrospect, it was the day he  learned his own diagnosis.  I cannot even imagine being able to do such a thing, knowing as I do the horror he must have been feeling.  And the very fact that he - the kindest man alive - could be so afflicted by this bitter disease has left me choked up and infuriated.

No more will my green sea go turn a deeper blue
I could not foresee this thing happening to you.

And my despair is compounded by my own terrible news.   My cancer blood marker (Carcinoembryonic  Antigen) is now five times higher than it was this time last year.  Seven years to the week of my diagnosis, last week, I was back at the Nova Scotia Cancer Centre.  Oh, how hard to be in that waiting room again.  And guess who was my oncologist there?  None other than my previous saviour, Dr. Mark Dorreen, another hero of The Cancer Olympics.

He is very concerned by the trajectory, and ordered a PET-CT, which I will have in 2-4 weeks.  He said the trajectory is likely to continue, and is predictive of recurrence.  Even if the PET-CT is negative, if the CEA continues to rise, I will continue to need repeated scans.  “Something will declare itself eventually,” he said.  Treatment will depend where my metastasis is, but will likely be chemotherapy for stage IV disease followed by surgery.  My survival chances would diminish to 10%.

He is retiring at the end of June.  How will I function, in a world without him and without Adam Good?

And once again the misery of having to tell my son, tell my family members, and tell all of you.

Maybe then I’ll fade away and not have to face the facts
It’s not easy facing up when your whole world is black.

I wish I had answers for where this leaves me, with work, with my patients, with my summer plans, with anything.

So once again, I suit up for the hurdles.


This post original appeared on The Cancer Olympics. It is reprinted with permission.