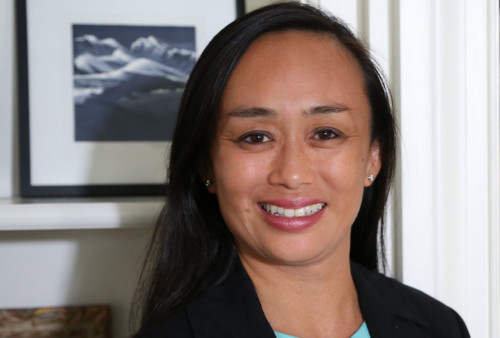 Q&A With Our President and CEO, Yung S. Lie, PhD

Yung S. Lie, PhD, is the first scientist and alumna to lead the organization since it was founded in 1946.

What are your thoughts on taking the helm at Damon Runyon?

YL: I’m excited about having the opportunity to lead an organization that I truly believe is going to make a difference for cancer research. I have a long history with the Foundation—as a Damon Runyon Fellow earlier in my career and then going on to lead the scientific programs at the Foundation for the past 10 years.

How did you find out you had been awarded a Damon Runyon Fellowship?

YL: I remember the moment, while I was in the lab, when I received the phone call from Damon Runyon letting me know that I had received a fellowship. I thought that it couldn’t possibly be real— that it was actually a prank call. I couldn’t believe that this amazing foundation had selected me to receive a fellowship. The same is true for most of the scientists that we support today. Many say that receiving a fellowship from Damon Runyon is a moment that changes their career path.

What did it mean for your career?

YL: It made a huge difference for my career. As a very basic researcher, being recognized by the Damon Runyon Cancer Research Foundation reminded me of the importance of linking my research to cancer and thinking about what impact and relevance that might have to curing disease in humans.

What is unique about Damon Runyon?

YL: We believe in the strategy of supporting young scientists and enabling them to take risks at this very critical point in their career. Only by taking risks will they be able to challenge paradigms, to ask new questions that will lead to breakthroughs in cancer research and, ultimately, have an impact on patients. There are plenty of opportunities for a young scientist to pursue other career paths. We want to make sure that they have the funding, resources, and encouragement to stay on this very important path.

Why is funding physician-scientists a focus for Damon Runyon?

YL: The pipeline of physician- scientists has been dwindling over many years. We are particularly concerned about making sure that the best physician-scientists, who have this training both in the clinic as well as in the laboratory, continue to focus their efforts on combating cancer.

What is the next big thing in cancer research?

YL: We’ve come a long way with the advent of targeted therapies and immunotherapy. A diagnosis of cancer now has a much better prognosis than it had 10 or 20 years ago. One of the next big challenges is better understanding which patients will respond to which treatments and to also be able to understand how to handle resistance to therapies. Damon Runyon is committed to finding ways to ensure that the best young scientists and physician-scientists are focused on answering these very difficult challenges in cancer.