Pictured here: 32 survivors, caregivers, and speakers and 27 testicles… You do the math.

My Reflections on the Testicular Cancer Foundation Summit 2019

Brotherhood, ball(s), and BBQ — a perfect weekend and just what I needed

What do you get when you gather a group of testicular cancer survivors and caregivers together in Austin, Texas for the Testicular Cancer Foundation (TCF) Summit? If you guessed a bunch of nuts having a deeply profound weekend, you hit the ball out of the park.

In the weeks leading up to the Summit, I had been waiting for answers on my random symptoms. Luckily, I received a call, literally as I was sitting on the airplane, saying that my CT was clear and there is still no cancer in my body. That set the stage for a great weekend, which only got better as I arrived to a complimentary four-course dinner at the hotel.

The Summit began on Saturday, August 10th, with opening remarks from Matt Ferstler, Kenny Kane, and Connor O’Leary, TCF’s founder/Chairman of the Board, current CEO, and Chief Mission Officer, respectively. Matt, Kenny, and Connor will all be Band of Ballers features in the upcoming months… even if they don’t all know it yet.

From there, each survivor had an opportunity to briefly share their stories with the group. While some were veteran attendees, I was in the newbie category, but I could already sense a feeling of brotherhood between us all.

We then launched into one of the best sessions I have ever experienced.

Dear World, founded by Robert Fogarty, has a unique concept. Still portraits are captured through photography, with words, sentences, quotes, or more written on the subject’s skin in black marker. Robert guided us through capturing our stories and whittling them down into a single phrase for our photo shoot over lunch.

I don’t want to give too much away from his process, but I will say I went in expecting to write, “One day changed my life forever,” even though Robert told us not to pick a phrase right away. However, after his guidance and working with my partner Ben Campo, a stage III survivor, I decided on something far more powerful: 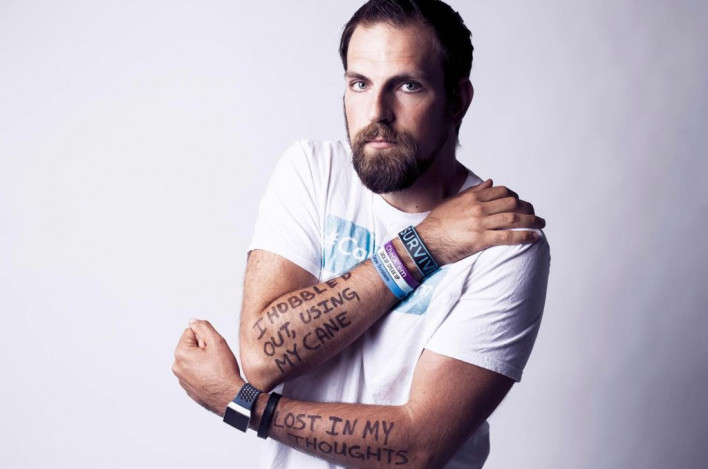 “I hobbled out, using my cane, lost in my thoughts.”

Following this, survivors went into one room and caregivers into another.

I have no idea what the caregivers talked about, but if it was as deep and moving as our conversation, they had an amazing time too. We all agreed to keep the conversation behind closed doors, but I felt so connected to Jarod Hale that I had to Facebook message him after the fact to ask him if I could write about something that he shared.

While this may come as a surprise, I’m actually an introvert.

If the situation calls for it, I can be extroverted. I generally like to keep to myself when given the choice. I can be so public for ABSOT because it’s my life’s mission, but I would much rather stay home, read, and snuggle with Conner in most other cases.

One thing that I’ve been noticing lately is that I experience minor panic attacks when I am in unfamiliar locations or around too many people for too long. While shopping at Kohl’s the other day, I practically had to run out of the store because it wasn’t the one I am used to and there were too many people there. However, I was at an entirely different Kohl’s about a week later and was perfectly fine.

This also happens after going out to eat or spending a lot of time with family and friends. As soon as I get home, I feel like I need to be alone and have a hard time explaining why. I never really speak up about it because I honestly feel like an antisocial asshole (and alliterative, too) for feeling this way, and I don’t remember this occurring before cancer.

Without any prompting from me, Jarod shared nearly an identical experience and we spoke further about it. Who knows if it’s related to the trauma of cancer, cognitive changes, or PTSD, but it was both surreal and reassuring to know I am not alone.

Our next speaker was Dr. Michael Harmon, who led a session about advocating for your own health.

He shared some questions that some cancer patients may be afraid to ask (such as, “Are you recommending this treatment to improve my survival or my quality of life?”) and shared why it’s important to bring those up. With your medical support team, Dr. Harmon advocated for an “educate, communicate, elaborate” trifecta to make sure all needs are met. 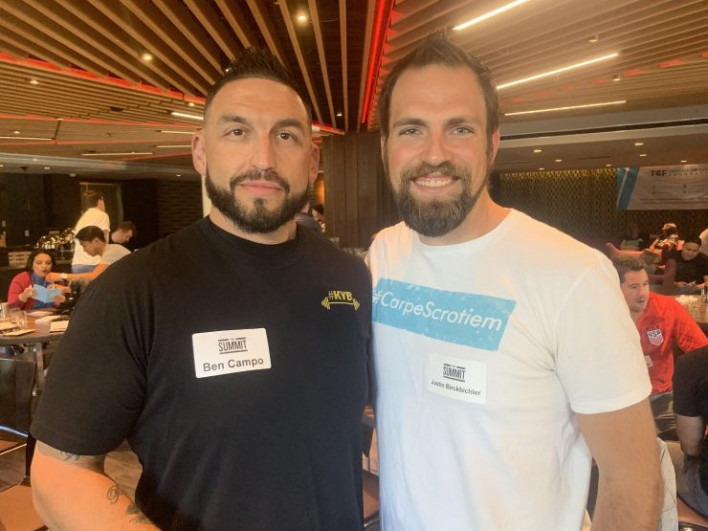 He noted that the oncology field is putting more of an emphasis on the survivorship side of cancer, and how important it is for support system, healthy habits, and creative outlets. I asked him about the current research on chemo brain, and he said it’s definitely a growing body of research. He’s seen some doctors treating it similarly to Alzeheimers or Parkinson’s, too. Additionally, he recommended that Western medicine look to Eastern medicine, not as a replacement, but as a complement.

After learning about how to take care of our bodies, licensed clinical social worker, Becky Morales spoke about life after cancer. She said that a traumatic impact, such as cancer, has an impact on the brain. Around anniversaries or triggering moments, the brain will often shut down to protect itself, which aligns with what I was feeling during the first anniversary of my orchiectomy.

Grief is also a huge part of this stage in life, and it’s not just about death.

You can experience grief over the loss of your old sense of self or former sense of normalcy. There will be good days and bad, and there is no set timeline, as everyone is unique.

She had us put our hands in front of our faces and asked what we could see. We couldn’t see much more than our hand, so she asked us to move it further away. Now we could see more of the room, but the hand was still in the way. Eventually, we stretched out our arms until our hands were as far away from our faces and we could still see most everything. Yet the hand remained.

If you’re Drax and didn’t pick up on this, it was a metaphor. The hand represented grief, while the distance was time. As time passes, it may be easier to deal with, but the grief will always be there in some form. She recommended that we take care of our bodies, minds, and souls and provided a number of resources, such as American Cancer Society, Livestrong, and more, to help find counselors who specialize in therapy related to cancer.

She closed out with a quote that really resonated: “Cancer doesn’t define us, but it is a part of us.”

Our final speaker for the afternoon was Dr. Brad Love. Yes, his name is really Dr. Love, but he does not work with Dr. Feel Good. He touched on how men are raised to be “John Wayne” about their health — stoic, silent, and tough. However, John Wayne discussed his health, lung cancer battles, and support systems openly throughout his life.

After letting that simmer for a moment, he tasked us with discussing how testicular cancer changed our identities.

I was at a table with Dave Fuehrer of Gryt Health (and August 2018’s Band of Ballers feature), Kyle Smith of CHECK15 (the Lefty to my Righty and June 2018’s Band of Ballers), Jeff Leichenberg (a Chicago-based lawyer who also went through a divorce less than a year after his diagnosis), and Ellis Emerson (who wasn’t a testicular cancer survivor, but is a stage III melanoma patient). We had quite the deep conversation that revealed a common thread — we all wanted to do more and change the world after our diagnoses.

After that final session, we headed over to FirmSpace for the reveal of our Dear World photos and a chance to listen to Mark Borja of Save a Nut (and July 2019’s Band of Ballers feature). We also had time to more deeply connect with our newfound brothers, listen to a band, and indulge in copious amount of BBQ. Later, we all headed out for a night on the town to unwind and relax.

The next morning, Kyle, Dave, and I all got to share our stories. For the record, you can find Kyle’s story here, Dave’s here, and mine at the video below (or on literally this entire website). We also got to hear a caregiver’s perspective on testicular cancer.

After all the stories were shared, Matt wrapped it up by reinforcing the common theme of the weekend: “We all have stories and we need to share them to change the world.”

I didn’t realize how much I needed this weekend until it was over.

As I’ve shared, I’ve been struggling a lot lately with my mental health, and to be surrounded by a community of people who get it was an experience I could not even begin to do justice to in writing.

I even had the chance to meet one of my biggest testicular cancer heroes, Mike Craycraft of the Testicular Cancer Society (and December 2018’s Band of Ballers). If you haven’t picked up on it by now, I got to meet a ton of the Band of Ballers, which was incredible. Previously, I had only met two — Kyle and Jason Greenspan. In the course of this weekend, I well over doubled my face-to-face meetings with the Band of Ballers. Now if only I could double my testicles. 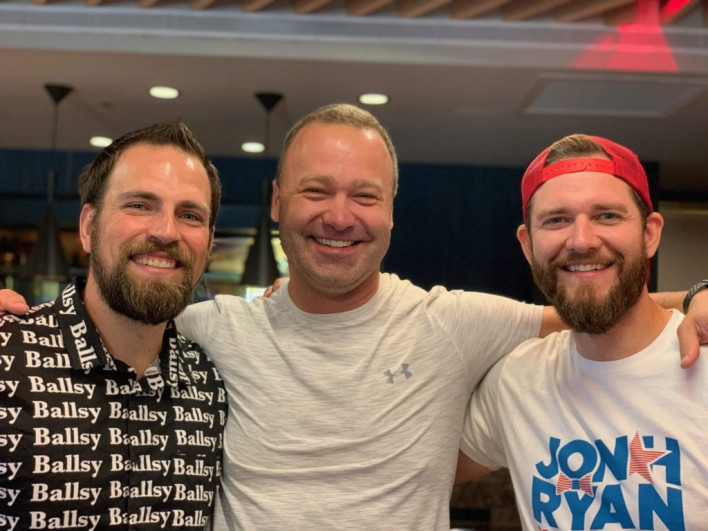 From left to right.. Me, Dave, and Kyle. And yes… We are all in the correct location.

Prior to this event, I had only met a handful of testicular cancer survivors, but never so many in one room at one time. The conversations, connections, and camaraderie will stick with me for literally my entire lifetime. Hearing that I’m not alone in my mental health challenges, my frustrations on chemo brain, and connecting more dots was an experience that I hope I get to do again next year.

Thank you so much to TCF and all the new friends I made this weekend. You are all truly ballers in my book.

PS — I don’t think I really did it justice, but the BBQ and all the food in Austin was amazing, so I also want that for next year.

PPS — What was supposed to be a short blog post ended up being over 1,700 words… although this is a typical situation for me, so I don’t know why I think I can write just a “small, reflective piece.” 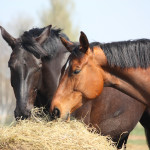