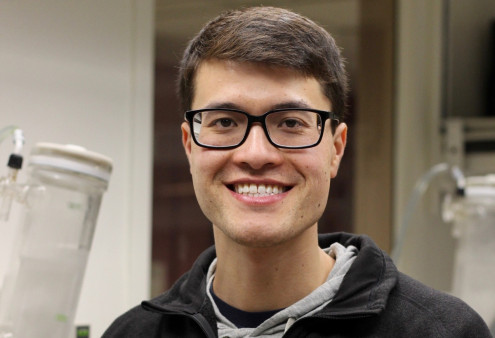 This may be catalytic for his research on the development of novel cancer therapies.

Advances in Genome Biology and Technology (AGBT) and the Damon Runyon Cancer Research Foundation have partnered to award a new fellowship in honor of Elaine R. Mardis, PhD, a founding member of the AGBT Scientific Organizing Committee and world-renowned genomics pioneer. Steven W. M. Crossley, PhD, at the University of California, Berkeley, will receive this award during the AGBT General Meeting to be held February 23-26, 2020, in Marco Island, Florida.

“Being selected for the AGBT Elaine R. Mardis Fellowship is an immense honor. I look forward to meeting and learning from leaders in the field of cancer genomics and having the freedom to pursue high-risk, high-reward projects. I am inspired to follow in the footsteps of Dr. Mardis who has made great strides in the fight against cancer,” said Crossley.

Mardis’s work in cancer genomics has opened new avenues for targeted therapies. In addition to research, she has dedicated two decades of tireless service as a founding member of AGBT. “I am so excited to award the inaugural AGBT Elaine R. Mardis Fellowship in Cancer Research to Steven Crossley. I am especially thrilled about the fellowship going to Steven, a synthetic chemist who is developing novel reagents that can be used to target the most problematic cancer-causing proteins. I know that Steven will be successful in this pursuit because he carries with him the motivation of a cancer survivor. That makes this award even more special to me,” she said.

This year marks the 20th anniversary of AGBT, which convenes one of the world’s most revered genome science and technology conferences, bringing together top global researchers, leaders, and innovators. As a recognized cornerstone for the genomics research community, AGBT provides an outstanding forum for exchanging information about the latest advances in DNA sequencing technologies, experimental and analytical approaches for genomic studies, and their myriad applications.

“We are proud to be partnering with AGBT to provide Steven with this valuable opportunity to be included in two highly prestigious scientific communities through both Damon Runyon and AGBT. I anticipate that this may be catalytic for his research on the development of novel cancer therapies and will also be incredibly meaningful for his career development,” said Yung S. Lie, PhD, CEO, Damon Runyon Cancer Research Foundation. Established in 1946, Damon Runyon Cancer funds high-risk, high-reward cancer research. Damon Runyon identifies and enables young scientists who are brilliant, brave and bold enough to pursue innovative directions others have not tried. These researchers have gone on to make breakthrough discoveries that have transformed the understanding of cancer and developed new approaches to prevention, diagnosis and treatment of all forms of this disease.

Elaine R. Mardis, PhD
Elaine Mardis holds the Nationwide Foundation Endowed Chair in Genomic Medicine and is co-executive director of the Institute for Genomic Medicine at Nationwide Children’s Hospital in Columbus, Ohio. She is also a professor of pediatrics and a member of the Solid Tumor Therapeutics Program, Ohio State University Comprehensive Cancer Center, The Ohio State University College of Medicine in Columbus; and an adjunct professor in the Division of Pharmacotherapy and Experimental Therapeutics, Eshelman School of Pharmacy, The University of North Carolina at Chapel Hill, North Carolina. She is currently the president of the American Association for Cancer Research.

Mardis’ research interests focus genomic characterization of cancer and its implications for cancer medicine. She was part of the team that reported the first next-generation-based sequencing of a whole cancer genome, and she has participated extensively in The Cancer Genome Atlas and the Pediatric Cancer Genome Project.

Steven W. M. Crossley, PhD
After receiving his PhD in chemistry from the Scripps Research Institute in San Diego, California, Steven Crossley decided to use his expertise in chemistry to address problems relevant to human health, especially cancer and mental illness. He joined the lab of Christopher J. Chang, PhD, at University of California, Berkeley, to develop reaction-based chemistry that can address the problem of “undruggable” targets in cancer therapy. These proteins lack grooves or “pockets” on their surface that can potentially bind small molecule drugs. A small molecule that can react with an amino acid in the target protein, forming a covalent bond, may circumvent the problem of poor binding pockets. He aims to find drugs that will target the most problematic cancer-causing proteins, expanding the potential to treat cancers that currently have few therapeutic options.

Crossley received a Bachelor of Science in chemistry from the University of British Columbia, Vancouver, Canada. During his undergraduate studies, he was diagnosed with testicular cancer. Fortunately, the tumor was surgically removed, and he continues to be cancer free. His brush with cancer, and several incidences of cancer in his family, provided the impetus to pursue cancer research.