I think about my birthday differently ever since my diagnosis of stage IIA invasive lobular breast cancer.

My birthday was July 3rd. I remember when I was young, I used to think I was just like the astrological sign Cancer. I thought it was fitting that I was born under this sign because I have so many of the characteristics. The irony is not only was I born under the Cancer sign; my body literally became a cancer two months after my 39th birthday in 2015.

Cancers are amazing! Their name says it all:

I think about my birthday differently ever since my diagnosis of stage IIA invasive lobular breast cancer. There’s an additional layer of heaviness with each year that wasn’t as thick pre-cancer. I can’t help but think about all the cancer warriors who didn’t get to live to their next birthday. Once you’re inducted into the cancer sorority or fraternity, it’s impossible to not be plagued by survivor’s guilt.

Why am I still here? Do I have an invisible expiration date stamped on my body?

I’ve seen so much death in cancerland. Some of us have experienced wrath from a few of those who are metastatic (stage IV) who get triggered when we complain about something in our lives post-cancer. “At least you don’t have stage IV and not dying,” is what some will often say. It’s important to not compare our cancer experiences with others because you have no idea what all they have been through up to this point. While it may not be stage IV cancer, there are other things experienced that are uncertain, frustrating, and could eventually become deadly.

What they don’t know is my story and how I nearly died at birth.

What they don’t know is how I sick I was as a child, constantly fighting off infections and hospitalized multiple times.

What they don’t know is how I’ve known I would get cancer since I was 18 but just couldn’t be sure of when and what type.

What they don’t know is the grief I feel daily over not being married and having a family.

What they don’t know is all the death I’ve seen from cancer before I was even 12 years old.

What they don’t know is my mother has had a rare blood cancer for the past 20+ years and it’s currently progressing.

From the moment I was born three months early, I have been fighting to continue living in this world. It took my parents eight years to conceive. I am an IVF baby. My mother was diagnosed with ovarian cancer during the pregnancy. The doctors wanted her to have a therapeutic abortion because they said there’s no way both of us would survive this pregnancy. Their prediction was one of us or both of us would die.

When I made my grand entrance into the world, it wasn’t filled with excitement. It was filled with urgency and worry that my mother and I would die. My mother started hemorrhaging to death which is why an emergency cesarean was performed. Everyone was panicked because I wasn’t supposed to be born until the last week of October, but here I was coming out in July.

I was born 1 lb., 5 oz. at St. Luke’s Hospital in Davenport, IA. My parents didn’t even get to hold me because I was immediately rushed into ICU because I wasn’t breathing. My lungs had collapsed. Once the doctors got me breathing, I began to have grand mal seizures. After two months in the ICU, they discovered I had a benign fibrous histiocytoma in my right leg which was surgically removed. According to Google, fibrous histiocytoma is a benign soft tissue tumor that may present as a fibrous mass anywhere in the human body.

My body experienced trauma from day one and has never stopped. While I’ve never been surprised that I got cancer, I was surprised that I got in my late 30’s. The trauma continues with permanent damage and scars from cancer treatments and eight surgeries. It makes sense that I have fibromyalgia, too. I honestly believe this would’ve occurred later in life but was triggered thanks to chemo. I’ve had pneumonia twice as a child and twice as an adult.

The physical and mental pain goes on and on.

So, why am I still here when others have died too young or have families who need them? I honestly don’t know. It is a shame that it took getting cancer to shake me out of simply existing to truly start living with purpose. The past year of my life was a little more difficult than I was prepared for, but my inherent resilience keeps pushing me forward, even when I don’t necessarily want to.

While I wait for my invisible expiration date to appear, I refuse to give up. I don’t to die on a bed of regrets. The song I’m Still Here by Sia perfectly sums up my thoughts at this moment because 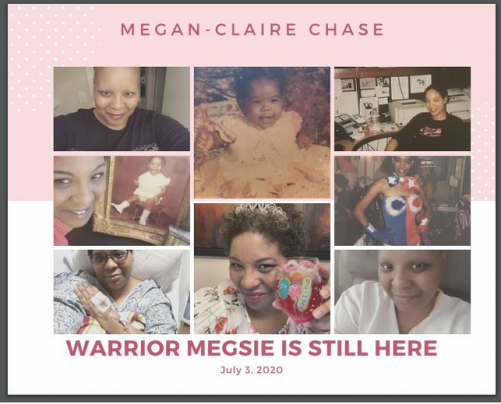 This post originally appeared on Life on the Cancer Train on July 5, 2020. It is republished with permission.