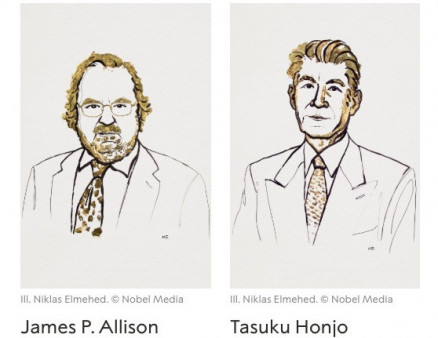 We are proud to have supported several Damon Runyon scientists when immunotherapy was still a bold and risky investment.

Damon Runyon congratulates the recipients of the 2018 Nobel Prize in Physiology or Medicine, James P. Allison and Tasuku Honjo, for their discovery that certain proteins act as “brakes” on the immune system, limiting its ability to attack cancer cells. Drugs called checkpoint inhibitors have since been developed to take these brakes off, freeing the immune cells to fight cancer and save countless lives.

This field of checkpoint inhibition, as well as the entire field of immunotherapy (harnessing the immune system to recognize and attack cancer cells), has grown in importance due to the contributions of a community of many scientists. We are proud to have supported several Damon Runyon scientists when immunotherapy was still a bold and risky investment. The reward has been their critical discoveries that have helped bring this new class of drugs to patients. Notably, Gordon J. Freeman, PhD (Damon Runyon Fellow ’79–’81) of Harvard Medical School and Dana-Farber Cancer Institute, worked in collaboration with Honjo and made seminal contributions to the discovery of the programmed cell death-1 (PD-1) receptor pathway. There are now 5 FDA-approved drugs that inhibit this pathway, and they are effective in treating nine types of deadly cancer, including melanoma, non-small cell lung cancer, head and neck cancer, bladder cancer, kidney cancer, and Hodgkin’s lymphoma.

Jedd D. Wolchok, MD, PhD (Damon Runyon-Lilly Clinical Investigator ’03–’08) of Memorial Sloan Kettering Cancer Center, worked with Allison and led the clinical trials of the CTLA-4 inhibitor drug Yervoy, a life-extending immunotherapy for metastatic melanoma approved by the FDA in 2011. (His comments and contributions are featured in the New York Times.) He and his colleagues later demonstrated the effectiveness of combining both CTLA-4 and PD-1 therapies, and with combining these therapies with radiation.

Collectively, their work has described the mechanisms in cancer’s ability to evade immune recognition through the CTLA-4 and PD-1 pathways and has significantly improved the understanding of cancer development and treatment. These scientists and their colleagues, including dozens of other current and former Damon Runyon scientists, continue to focus their research on immunotherapy for treatment of many cancer types, addressing questions about how to improve its effectiveness and to predict which patients are most likely to respond to this class of therapies.