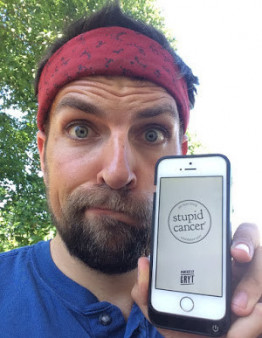 This face is also powered by Gryt.

An Update to the Stupid Cancer App

The Stupid Cancer app came out last year — time for an update!

In the fall of 2017, the Stupid Cancer organization, in partnership with Gryt Health, released the Stupid Cancer app. I wrote about my initial impressions of the app soon after its debut and I’ve learned a lot about it since then (not the least of which is realizing that the co-founder is fellow testicular cancer survivor and July’s Band of Ballers feature, Dave Fuehrer — stay tuned). They’ve released a ton of new features over the past few months.

Minor, but needed, improvements to the Stupid Cancer app

One improvement is that the Stupid Cancer app is now available on the Android platform. While that literally has no bearing on my life (since I am an Apple user… for now — I’m going Team Pixel on my next upgrade), this definitely opens it up to a wider platform. Uniballers of Droid, come find me!

Similarly, the cancer type list has been updated to include more types of diagnoses. While testicular cancer has been represented since day one (see my above comment about Dave), it’s great to see more inclusivity in the Stupid Cancer app.

You can now send live links in the Stupid Cancer app, which is very helpful instead of having to retype or copy and paste (aka copy pasta) a link into your web browser. This seems like a minor improvement, but as a millenial, having to do a few extra clicks are the worst thing that has ever happened to me (he says on his blog where he’s also written about losing both his left testicle and all of his hair, regrowing white blood cells, and emptying the contents of his stomach for five days straight).

My favorite improvement to the Stupid Cancer app

As I expressed in my initial blog post, my biggest desire for the Stupid Cancer app was for individual chat rooms for specific cancer types. While these still don’t exist (I’m still holding out for The Ballroom), they do now have chat rooms defined for special purposes.

The Main Chatroom is kind of the “catch all” and hasn’t changed much since the original iteration. This is where you go just to hang out with the cool kids. There are also individual chat rooms about faith, food, caregivers, and newly diagnosed with cancer. Poke around to find your tribe.

I spend most of my time in the AppChat room. This is where their various chat series occur, including ones dedicated to specific types of cancer (I still want a dedicated Ballroom, especially to discuss my testicular exams and doctors offices research study with other testicular cancer survivors/patients, which you should read and share widely here!), special programs (like the Movie Club), and more. I don’t want to appear too biased, but the best AppChat occurs on the second Thursday of every month.

The best AppChat on the Stupid Cancer app

From 8 to 9 pm EST on every second Thursday of the month (previously Tuesdays), you can join the AppChat room of the Stupid Cancer app to participate in the “How to Tell Your Story” chat series, led by this incredible, handsome, witty, and very humble testicular cancer survivor that runs a fantastic blog. (Spoiler — it’s me.)

All cockiness aside, I do really enjoy leading this series. I have a regular group of cats that I try to herd into a coherent conversation about how and why to tell your cancer story, but sometimes even I get caught up in discussing the epicness of cinnamon rolls.

So far, we have covered developing a title, where to begin, the tone and purpose, structuring and finding supports, how to use your story to spread awareness, focusing on your audience, and a brief discussion on promotion. In the next few months, I want to transition into making this more of a writer’s workshop, in which we all gather to share our stories, give and receive critique, and help each other grow as writers.

There’s power in sharing your story. It’s about not letting cancer happen to you… it’s about grabbing cancer by the ball(s) and making it work for you. By joining this club (that you never wished to be a part of), you’ve already taken the first steps towards telling your story.

If you’re interested, I’d love to see you drop by the AppChat room of the Stupid Cancer app and join in the fun. Despite what some of my regulars say, I am actually pretty nice and easygoing. Don’t believe a word they say… unless it’s about my ridiculous overuse of ball puns — that’s all true.

A conversation with Aerial Donovan of the Stupid Cancer App

Beyond my own use of the app, I’ve had a chance to talk with the creators behind all of the features and learn about the ’why’ behind the app. While I was at HealtheVoices18 (read about Days 1 & 2 here and about Day 3 and my reflection here), I got to meet with Aerial Donovan, the program director of Gryt Health. Among other topics, we discussed future features of the Stupid Cancer app. We discussed the ability to filter users, since right now the only way to see matches is by changing your cancer type. They also have more avatar customizations coming out shortly, and I’m hoping for a spiky look as an option. I’m looking forward to these and other features and can’t wait until it rolls out.

But the upcoming features of the Stupid Cancer app weren’t was struck me most — it was the passion in which Aerial spoke about the app and how it clearly was reflected in the entire Gryt Health team.

One feature I inquired about was the ability to send pictures in the main chat room, since I thought this might help with facilitating a chat by posting graphics of the questions. She understood my request and then shared how hard the team has been debating whether or not to allow pictures in the main chat room (they are allowed in individual messages). In my mind, I couldn’t understand why this was such a big issue.

But then Aerial dropped a truth bomb that made it all clear. The main chat room is where most people get their feet wet. There’s a sacredness to being anonymous. While I am super on the ball when it comes to talking about my cancer experience, this may not be everyone’s decision. Preserving a space where you can just be an avatar makes it a safe place to be Justin B. as opposed to Justin Birckbichler, King of the Ball Puns. Once you feel secure and welcome in the community, you can branch out into DMs and share as many pics as you want with your newfound friends.

That single anecdote really illustrated how much integrity Gryt Health has behind the scenes. They are truly a great company of many extraordinary individuals, and I am proud to say I am not receiving any compensation in saying this (aside from a cool hat and shirt, but that’s since I’m an Uber Ambassador — it’s a real thing!). Thank you, Gryt, for making such an awesome place in the Stupid Cancer app, and I can’t wait to write the eventual third edition of this post...

And by then, I fully expect the Ballroom to be 100% operational for those of us who are operating with 50% of the standard amount of testicles. 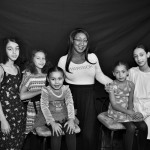