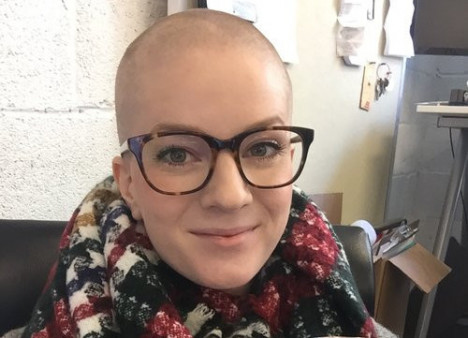 Freshly shaved and ready for work

People will show up when you need them to. They will support the decisions you need to make. If they don’t, talk to the HR department—STAT.

Most times this response is met with comments on my “badassery,” which are always much appreciated, but don’t feel quite as on point here. I remember sitting across from my breast surgeon while she spouted medical jargon at me (ah, the days I didn’t know what HER2 meant…) and immediately asking if I would still be able to work through all of it. My friend who came with me stared at me incredulously, “Jen, no matter what we’ve got you.”

But it hit me then, in that moment, that working would keep me sane. The thought of it was keeping me sane while I was being told I had cancer, there was no way I would be able to sit in the house and rest. Heck, I could barely rest during a normal sleep cycle after a particularly zenful day.

Telling my team I had cancer was difficult. I scanned the room and watched for their faces to give away their darkest thoughts: “Well. There’s more work we’ll have to pick up.” “She won’t be at 100%, that’s for sure.” You know, all those dark-ass irrational thoughts that cancer plants in your brain. But nothing of the slightest happened. Instead I was met with support, with promises of carrying the load when I might not be able to. Of understanding.

So. How did I do it? Well, full disclaimer, I work for a startup. A rather amazing one at that (Parking Panda, if you’re so inclined) and so I was immediately afforded the opportunity to work from home whenever I needed to. That, right there, meant that come hell or high water (chemo or the hot flashes) I could prop up however I needed to with my beloved MacBook Pro.

My chemo rounds were every 3 weeks, and after the first treatment, I knew my cycle and subsequent side effects pretty well. I would take chemo days off (Wednesdays), and work in the office the rest of the week. That is, unless I had a chemo side effect to fight off (read: destroy me), then I would just work from home and usually horizontally from my bed. For my bilateral mastectomy, I took 2 weeks off. For my reconstruction 5 months later, I took one week off.

I would limit the amount of video calls I did, always preferring to suggest the phone or a screen share, I would tag others in if I wasn’t feeling my best, and I always communicated with my managers when the going got tough. Or I tried to. Thing about cancer and chemo, is that it takes up a large part of your brain, and I was constantly worried that missing that focus could ruin my working potential.

I won’t lie. There were days when I wasn’t at 100%, or 80% or 50%, or maybe even 30%, and sometimes I needed last-minute reprieve from an overly stressful situation. But that’s when the strength of my team and my work community came in. And they never made me feel bad. Sure, there were times someone sneezed across the office and I abruptly left to go home. And that action maybe wasn’t understood by the healthy beings around me, I could sense they thought that maybe I was being overdramatic.

But that’s the thing with cancer, right? No one can get it unless they’ve been there. And those types of assumptions happened not only at work, but in all aspects of my life. So I think that helped me slough them off.

So, imagine my surprise when after 6 rounds of chemo, with a chemically ravaged mind and body, I heard the words “Parking Panda has been acquired by SpotHero.” And I thought, ARE YOU FUCKING KIDDING ME?! Immediately I thought about my job, the one I had worked so hard for while I was sick, and the health insurance that came with it. SpotHero had been our competitor, and now it felt like they held my life in their hands.

Once the announcement was made, we were flown out to their Chicago headquarters so that we could all cold stare each other (oops, I mean get to know each other). After a day or so of mingling and trying not to freak out about my bilateral mastectomy TWO WEEKS AWAY, we had an all team meeting.

All 200 or so of us crammed into the cafeteria, and watched the proceeding slideshow with a bit of trepidation mixed with awe. At the end, each company was set to present their “Super Hero of the Month” award. SpotHero named theirs (a badass, of course) and then Parking Panda got up to name theirs. It took me a moment to realize when they said my name, and that they were holding up a pink version of SpotHero’s branded (usually blue) t-shirt for me.

All those moments I had worked so hard for with my beloved Parking Panda, all those moments I had with the doctors, wondering if I could continue my role, they all came to a head as I held that shirt. It was all worth it. Competition or not, working full-time or not, anxiety through the roof or not, people will show up when you need them to. They will support the decisions you need to make. If they don’t, then get yourself to the HR department STAT. Make the decisions you need to.

In the end, I got a t-shirt for it. And I fricken love t-shirts.

Let me know your thoughts on working through treatment. Was it an option for you? Did you have the opposite experience?