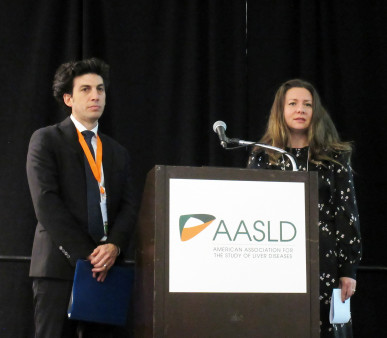 Liver fat may be a driver of increased cancer risk associated with obesity.

People with non-alcoholic fatty liver disease (NAFLD) have higher rates of several types of cancer, with the greatest increase seen for liver cancer and other gastrointestinal cancers, according to a report at the AASLD Liver Meeting this week in San Francisco.

“NAFLD may be the driver of increased cancer associated with obesity,” suggested presenter Alina Allen, MD, of the Mayo Clinic in Rochester, Minnesota. “This could change our understanding of the relationship between obesity and cancer.”

A growing body of evidence links overweight and obesity to various types of cancer. According to the Centers for Disease Control and Prevention, obesity increases the risk of at least 13 cancer types, which together make up about 40 percent of all cancer diagnoses in the United States.

Fatty liver disease, often associated with obesity and metabolic syndrome, is a leading cause of liver problems in the United States. NAFLD and its more severe form, non-alcoholic steatohepatitis (NASH), refer to liver fat accumulation in people who do not drink heavily. Over time, the buildup of fat and the development of scar tissue, known as fibrosis, can interfere with normal liver function and may trigger the development of liver cancer known as hepatocellular carcinoma. However, the major cause of death for people with NAFLD is not advanced liver disease, but rather cardiovascular disease and cancers outside the liver.

Allen and colleagues compared cancer rates among 4,791 adults diagnosed with NAFLD in a Minnesota county between 1997 and 2018 and a general population control group of 14,432 people matched by age and sex, derived form the Rochester Epidemiology Project database. About half were women, more than 80 percent were white and the mean age was 53 years.

People with NAFLD were more likely than those in the control group to be obese (67 percent versus 35 percent), to have diabetes (56 percent versus 26 percent) and to have high blood pressure (63 percent versus 41 percent). In both groups, 10 percent were smokers. People with hepatitis B or C and other causes of liver disease were excluded.

In both groups, the most common cancer types by far were breast cancer and prostate cancer. Rounding out the top five were colon, lung and uterine cancers. Liver, stomach, esophageal, pancreatic and ovarian cancers were less common, but they showed a stronger association with fatty liver disease.

The risk of all cancers combined was 91 percent higher in the NAFLD group compared with the control group. As expected, liver cancer showed the greatest increase, with about three times more cases in the NAFLD group. Uterine, stomach, pancreatic and colon cancer were all around twice as common among people with NAFLD. The differences in risk were not statistically significant for lung or esophageal cancer, meaning they could have been attributable to chance.

The researchers also asked whether fatty liver disease is associated with a greater risk of cancer than obesity without NAFLD. They found that people with NAFLD had a significantly higher overall cancer risk compared with obese individuals in the control group who did not have a NAFLD diagnosis. In fact, obesity was associated with a higher cancer risk only in those with NAFLD.

Allen concluded that these data provide an important hierarchical overview of the top cancer risks associated with NAFLD. “Liver cancer had the highest increase in relative risk, and this was not a surprising finding,” she said. “However, the 2.5-fold higher risk of stomach and pancreatic cancer are novel data that the medical community should be aware of.”

Allen recommended that future studies should further examine the association between fatty liver disease and cancer, and more data is needed from people of other races and ethnicities. If the link is confirmed, this may suggest that people with NAFLD could require different or more frequent cancer screenings.

Click here to learn more about obesity and cancer.