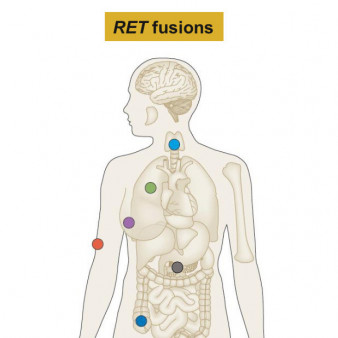 A new targeted therapy directed against cancer with specific mutations shrank tumors in people with thyroid, lung and other cancers, researchers reported. LOXO-292 works against tumors with mutations in a gene known as RET, which plays a role in cell multiplication. RET changes are most common in thyroid cancers but are also found in a small proportion—2 percent or less—of many other cancer types, including lung, colorectal and pancreatic tumors.

In a Phase I study of 82 patients, the overall response rate was 45 percent for people with RET-mutated medullary thyroid cancer and 77 percent for those with various other types of cancer with RET fusions. Plus, the treatment was well tolerated with few side effects. If

LOXO-292 continues to do well in larger trials, it could become part of a new paradigm of treating cancer based on its genetic characteristics, regardless of where it occurs in the body.