I started to get a burning sensation in my chest when I sneezed. I knew something wasn’t right, so I went to my doctor. I’d been doing breast self-exams for years, and neither my doctor nor I felt a lump. But a mammogram showed that I had Stage IV HER2-positive, estrogen receptor–positive breast cancer. It had spread to my liver and bones. The burning sensation was caused by a cancerous lesion on one of my ribs. I told my oncologist, “Hit me with everything you’ve got” and started chemotherapy immediately.

Because my cancer was estrogen positive, I had an oophorectomy [surgical removal of the ovaries]. I was thrust into menopause overnight. The hot flashes were the worst. I’d be sitting in a chair, and suddenly, sweat would start running down my face! I also started an aromatase inhibitor to wipe out my body’s remaining estrogen.

I finished nine months of intravenous chemotherapy and transitioned onto an oral hormone therapy. That was a lonely time. I had friends, but I didn’t know any other women—and certainly no African-American women—with breast cancer. I learned upsetting news about my mother, who passed away in 2004 from what I’d believed was lung cancer. She actually died of breast cancer that had spread to her lungs.

I found out I was getting a medical discharge as a senior master sergeant in the U.S. Air Force, a career I’d loved for 25 years. After I hung up the phone, I cried like a baby. Through the military, I built an amazing life for me and my daughter. I was sad because I hadn’t retired on my own terms. But then I thought, Maybe God has different plans for me.

I chose to have a mastectomy, even though I didn’t need one. My doctors resisted at first, but I felt strongly about it, and, eventually, they said yes. I had a mastectomy on my right side and a breast reduction on my left side and, 18 months later, reconstructive surgery. Now both sides match, and I couldn’t be happier. 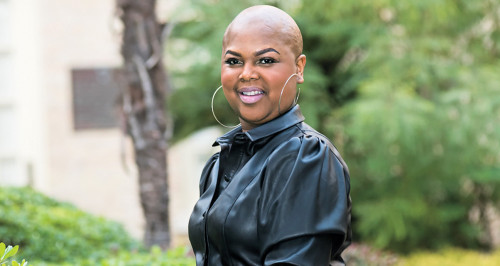 I attended my first national breast cancer conference, in Seattle. Then, after three years of disease stability, a scan showed my cancer was on the move. For the next six months, my oncologist and I tried different combinations of chemotherapy drugs, looking for a protocol that halted cancer growth without causing too many side effects. In August, we landed on a great combination.

That drug pairing worked perfectly for nearly three years. In early summer, though, another scan showed my cancer was becoming active again, so my oncologist added a third drug to my regimen. Sometimes I feel nauseous, but it doesn’t last.

I got married the day before my 50th birthday! People always say, “Metastatic breast cancer patients can’t find love,” and I’m here to show them it can be done. My husband is a wonderful man who loves me no matter what.

Things had been stable for a couple of years when one of my lesions—the one on my rib cage—began to grow. I started on a new clinical trial for a promising new breast cancer drug for women with HER2-positive metastatic breast cancer.

On the advocacy front, I started going to Capitol Hill to lobby lawmakers to support health care legislation for veterans and speaking at events around the country.

Every day, I get texts, emails and phone calls from women who are newly diagnosed. Women, especially Black women, want to talk to someone who understands. I tell them to advocate for themselves and not to let doctors dismiss their concerns. I’m out there fighting for them, fighting for change, fighting for equal standards of care. Progress is coming, but it’s slow. When I was diagnosed, for instance, I never saw commercials for breast cancer drugs featuring African-American women. And I see that now.

I’m still on the drug from the clinical trial, now approved by the Food and Drug Administration. One of my goals is to help make African-American women aware of the importance of taking part in clinical trials. Black Americans mistrust the medical system because of a long history of abuse and exploitation, but I’m doing my best to encourage Black folks to trust the system because clinical trials can be lifesaving. This latest clinical trial helped to extend my life. Plus, of course, my doctor and my faith in God.

Breast cancer ranges from Stage I to Stage IV, which is metastatic cancer that has spread elsewhere in the body. The brain, bones and liver are common sites of breast cancer metastases, also known as mets.

Most breast cancer tumors carry hormone receptors. Estrogen stimulates breast cancer growth; treatment often includes hormone-blocking medications, and sometimes oophorectomy (ovary removal). The 20% of breast cancers that carry HER2 receptors can be treated with HER2-blocking drugs. Triple-negative breast cancer doesn’t express any of these receptors and is harder to treat.