Cancer mortality fell by 29% between 1991 and 2017, largely driven by a decline in lung cancer deaths.

Cancer-related deaths in the United States continue to fall, largely driven by long-term declines in mortality due to lung, colorectal, breast and prostate cancers, according to the latest annual report from the American Cancer Society (ACS). The 2.2% decrease from 2016 to 2017 was the largest one-year drop ever reported. However, new cancer diagnosis rates showed little change. The report authors estimate that 1,806,590 people will develop cancer and 606,520 people will die from it in 2020.

“The news this year is mixed. The exciting gains in reducing mortality for melanoma and lung cancer are tempered by slowing progress for colorectal, breast and prostate cancers, which are amenable to early detection,” lead author Rebecca Siegel, MPH, said in an ACS press release. “It’s a reminder that increasing our investment in the equitable application of existing cancer control interventions, as well as basic and clinical research to further advance treatment, would undoubtedly accelerate progress against cancer.”

As described in the journal CA: A Cancer Journal for Clinicians, each year theACS collects the latest data on cancer incidence (new cases), mortality and survival. Incidence data, available through 2016, come from the national Surveillance, Epidemiology and End Results program and other sources, while mortality data, available through 2017, come from National Center for Health Statistics. 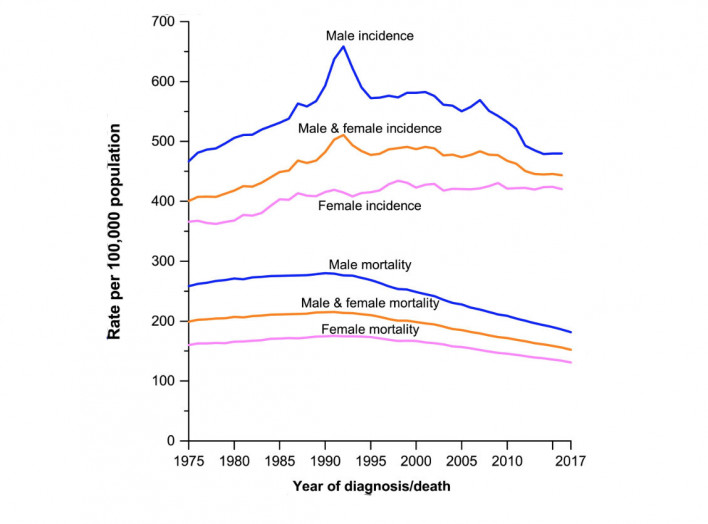 The report authors note that the cancer death rate rose until 1991, then fell continuously through 2017. Over this period the rate declined by 29%, representing 2.9 million fewer deaths than would have been expected if the peak rate remained the same.

The decrease in lung cancer mortality has accelerated, dropping by 5% among men and by nearly 4% among women between 2013 and 2017, largely due to a decline in smoking. Nonetheless, lung cancer was still responsible for nearly a quarter of all cancer deaths in 2017—more than breast, prostate, colorectal and brain cancers combined.

Reductions in death rates for the other three leading cancers have slowed or halted. The death rate for breast cancer fell by 40%, prostate cancer by 52% and colorectal cancer by 53% among men and by 57% among women in recent years. (These figures are not directly comparable because the ACS reports changes for the various cancers using different date ranges.)

While the decline in lung cancer was mainly due to prevention, the report authors attribute the dramatic recent decline in melanoma mortality—a 7% drop between 2013 and 2017—to the development of effective new treatments, including checkpoint inhibitor immunotherapy.

Survival rates for blood cancers such as leukemia and lymphoma have also seen major gains thanks to improvements in treatment, including the development of targeted therapies. For example, most people with chronic myeloid leukemia who are treated with tyrosine kinase inhibitors now have nearly normal life expectancy, the authors note. The recent upward trend in liver cancer mortality has slowed in women and stabilized in men, perhaps also related to recent improvements in treatment. 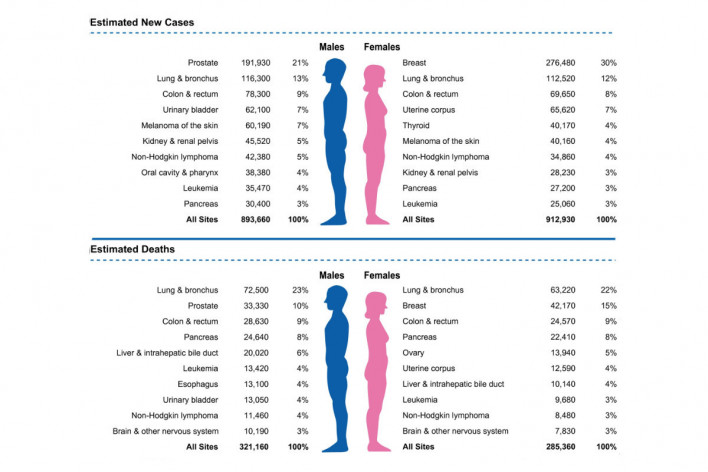 Turning to new cancer cases, the report shows that the overall cancer incidence rate for men declined rapidly between 2007 and 2014, but then stabilized due to a slowing decline in colorectal cancer and a plateau prostate cancer. (In part, this reflects the fact that prostate cancer diagnoses dropped dramatically after guidelines recommended against routine PSA screening.)

Overall incidence in women has generally been stable over the past few decades, as declines in lung cancer have been offset by a slowing decline for colorectal cancer and increasing or stable rates for other common cancers.

Lung cancer incidence is declining about twice as fast in men compared with women because men are more likely to smoke and therefore have more to gain from falling smoking rates. Incidence of colorectal cancer is similar in men and women. Rates fell rapidly during the 2000s as colon cancer screening became widespread, but that decline appears to have leveled off.

Breast cancer rates have risen slightly since 2004, by about 0.3% per year, which the authors attribute in part to declining in fertility—spending less time pregnant increases lifetime exposure to estrogen—and increasing in obesity.

New cases of liver, kidney, pancreatic, oral and melanoma skin cancer continue to rise, according to the report. Liver cancer has seen the most rapid increase, rising by 2% to 3% annually between 2007 and 2016. Now that hepatitis B can be prevented with a vaccine and hepatitis C virus can be easily cured with antivirals, fatty liver disease is a rising cause of liver cancer. The jump in mouth and throat cancer is largely attributable to human papillomavirus (HPV), which is also preventable with a vaccine.

The overall five-year survival rate for all cancers diagnosed between 2009 and 2015 was 67%. However, survival rates vary dramatically across cancer types. Racial and ethnic disparities are also apparent, as the survival rate was 62% among Black people compared with 68% among white people.

The report authors note that cancer survival has improved since the mid-1970s for all of the most common cancers except cervical and uterine cancers, which—unlike many other cancers—have not yet seen major treatment advances for people with advanced disease.

“The accelerated drops in lung cancer mortality as well as in melanoma that we’re seeing are likely due at least in part to advances in cancer treatment over the past decade, such as immunotherapy,” said ACS chief medical and scientific officer William Cance, MD. “They are a profound reminder of how rapidly this area of research is expanding, and now leading to real hope for cancer patients.”

This year’s report includes a special section on cancer among adolescents and young adults. In 2020, experts predict 89,500 new cancer cases and 9,270 cancer deaths among people 15 to 39 years old. People in these age groups are more likely to be diagnosed late due to the rarity of cancer among young people, and they are at risk for long-term and late effects of cancer and its treatment, including infertility and heart problems.