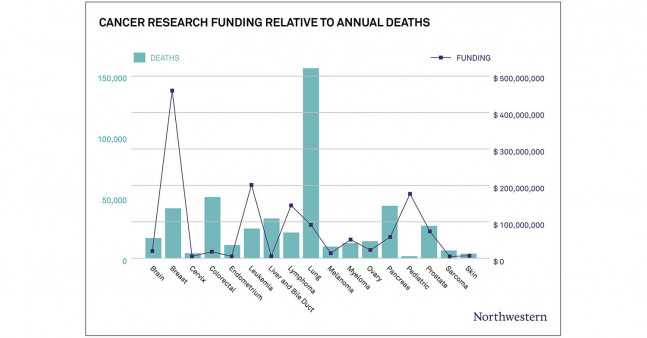 Why Are Some Cancers Better Funded Than Others?

Some of the most common and deadly cancers receive little attention and resources.

The amount of nonprofit funding for different types of cancer has little correlation with how common the cancers are or how many people they kill, according to a recent study by researchers at Northwestern University. In particular, cancers that are surrounded by stigma receive disproportionately little funding.

“The goal of this study is not to divert funds away from cancers that are well supported, but rather expand funding for other cancers that aren’t getting enough support currently,” lead author Suneel Kamath, MD, said in a university news report. “These are all deadly and life-altering diseases that deserve our attention and support.”

Kamath and colleagues from Northwestern University’s Feinberg School of Medicine and Robert H. Lurie Comprehensive Cancer Center analyzed nonprofit cancer organizations with more than $5 million in annual revenue, linking their funding to cancer incidence (number of new cases), mortality and years of life lost. Years of life lost differs from mortality by taking into account cancers that strike at younger ages. This analysis did not include organizations that primarily provide medical care (such as hospitals) or government funding from the National Cancer Institute, a major source of research support.

As described in the Journal of the National Comprehensive Cancer Network, a total of 119 cancer-related nonprofit organizations were included in the analysis. Together, these groups generated nearly $6 billion in annual revenue in 2015. Three quarters of this funding ($4.6 billion) went to groups like the American Cancer Society that cover all types of cancer.

Looking at the organizations with a specific focus, the cancers with the largest number of groups were breast cancer and childhood cancer (both with 13 groups), distantly followed by leukemia and lung cancer (both with four groups). Kidney, bladder, stomach and esophageal cancers were among the types that had no nonprofits with more than $5 million in annual revenue. 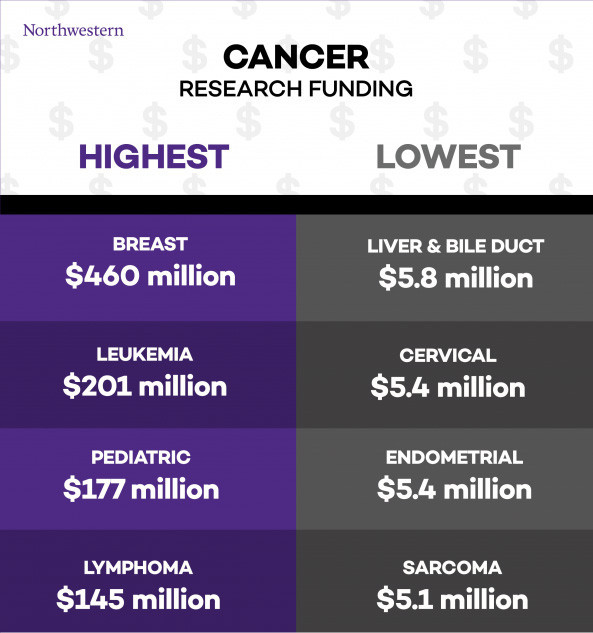 Breast cancer received the most funding by far, at $460 million, accounting for a third of all cancer-specific nonprofit revenue. Next in line—with less than half the funding of breast cancer—were leukemia ($201 million; 15% of total revenue), childhood cancers ($177 million; 13%) and lymphoma ($145 million; 11%). These cancers all received a greater share of funding relative to their proportion of total new cancer cases, mortality and years of life lost.

“Shame and discomfort with talking about our bowels and ’private parts’ may be reducing funding for diseases like colon or endometrial cancer,” according to Kamath.

The most obvious example was lung cancer, which accounts for the most cancer deaths by far—almost more than the other types combined—but received less than $100 million in funding. Liver cancer—associated with heavy alcohol use and hepatitis B and C, which are frequently transmitted through injection drug use—received hardly any funding.

The researchers noted that cancers that are common but typically progress slowly or have a relatively low mortality rate, like breast cancer, have more survivors who can become advocates for the cause and attract more donors. A factor not mentioned by the researchers is the fact that breast cancer affects mostly women, so it receives attention and funding from organizations and political entities that support women’s issues—much as HIV/AIDS has received attention and funding from groups that support the LGBT community.

“[Nonprofit organization] funding by cancer type is not proportionate with individual cancer burden on society,” the study authors concluded. “Disease stigma negatively impacts funding. A significant need exists to increase awareness and funding for many under-supported but common and highly lethal cancers.”

The researchers noted that underfunding may have negative repercussions for research, novel drug development and the number of drugs approved by the Food and Drug Administration for poorly funded cancers.

“We hope to bring awareness to the organizations with less relative funding so we can collaborate to improve funding and outcomes for all patients with cancer,” said study coauthor Sheetal Kircher, MD.