Challenges of Navigating Cancer as a Member of the LGBTQ+ Community

LGBTQ+ individuals can face a host of challenges in their day-to-day lives, including discrimination, hostile words and actions, and ignorance. When it comes to cancer, LGBTQ+ people often come up against additional hurdles that are not faced by those who are cisgender (meaning those who identify with their sex assigned at birth) and/or heterosexual.

The LGBTQ+ and Friends Employee Resource Group at Dana-Farber recently hosted Dr. Ulrike Boehmer for a talk about challenges that LGBTQ+ people can face while navigating a cancer diagnosis. Dr. Boehmer is an associate professor at the Boston University School of Public Health and co-edited Cancer and the LGBT Community: Unique Perspectives from Risk to Survivorship (Springer 2015), the only textbook on LGBTQ+ oncology.

Boehmer presented evidence that the rates of certain cancers are higher among LGBTQ+ individuals than cisgender or heterosexual people. According to the literature:

LGBTQ+ individuals’ fear of discrimination can stop them from pursuing care.

A 2014 report by the advocacy group Lambda Legal shows that LGBTQ+ individuals often face discrimination in a healthcare setting. They found that more than half of the LGBT survey participants had faced some kind of discrimination by healthcare professionals based on their sexual orientation. Eight percent of LGB respondents and 27 percent of transgender respondents reported that they have been denied care outright.

LGBTQ+ individuals’ well-founded fear of discrimination means that they are less likely to disclose their sexual orientation and gender identity to physicians. However, this can be important information for providers to have when determining the best course of treatment. Boehmer said that she believes that information on sexual orientation and gender identity should be included in patient medical records so that they are not forced to disclose this information over and over again and experience that accompanying fear. Physicians, nurses, and other staff should be sure to use the patient’s pronouns, she notes.

In some of Boehmer’s studies, she found patients were afraid that their physicians would express homophobia or transphobia and would treat them unequally if they disclosed their sexual orientation and gender identity. This is a burden on the patient and also on their support system.

While disclosure of one’s sexual orientation can be daunting, Boehmer says it can be very helpful for the patient’s caregiver or support person. When a patient is open with their physician about their sexual orientation, the patient’s caregiver or support person felt significantly less distress and felt that they could be included in the conversation, Boehmer’s studies found. In these studies, the caregiver felt they could participate properly in the patient’s cancer journey and have their role recognized by the physician and nurses.

The patient disclosing their sexual orientation or gender identity made it easier for a physician to understand their unique support system. Boehmer says that LGBTQ+ patients often have support systems that are different from their cisgender and heterosexual patient counterparts. Understanding that helps physicians provide more well-rounded and inclusive care.

It is very important for cancer patients to have a strong support system and for their medical team to include their support people in treatment plans.

There are inequities in LGBTQ+ access to health care.

Members of the LGBTQ+ community that have cancer can face significant barriers to health care when compared to their heterosexual counterparts, Boehmer noted. Studies she ran showed that:

LGBTQ+ people use counseling and support groups at a higher rate.

Having someone to talk with after a cancer diagnosis can be immensely helpful. Many cancer survivors find solace in attending support groups or mental health counseling. Boehmer’s studies showed that members of the LGBTQ+ community were more likely to attend support groups and go to counseling.

Despite these higher rates of attendance, Boehmer said that researchers are still unsure if support groups and counseling are effective at meeting the LGBTQ+ individuals’ specific needs. The data also does not include how long LGBTQ+ individuals stay in support groups, or whether they feel comfortable in what are often highly gendered spaces.

With those caveats, Boehmer says these higher attendance rates indicate that LGBTQ+ individuals may have more robust coping mechanisms due to their inclination to seek support and therapy.

While Boehmer supported all her points with studies and data, she concluded with saying that more research is still needed. The way that cancer affects the LGBTQ+ community is understudied and more research can fill in the current gaps. It’s not just important to look at the additional challenges the LGBTQ+ community deals with when diagnosed with cancer: Research also needs to cover how best to support this community through and after their cancer journeys.

This article was originally published on April 20, 2021, by Dana-Farber Cancer Institute. It is republished with permission. 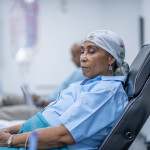