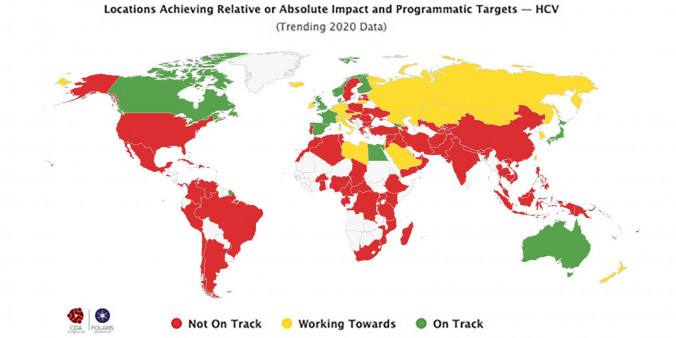 Greater political will and financial support for national programs are needed to eliminate viral hepatitis.

The Polaris Observatory uses epidemiological data to model the disease burden and economic impact of hepatitis B and C. Sarah Blach, an epidemiologist at the Center for Disease Analysis Foundation, and colleagues analyzed preliminary data for 2020 and 2021 to assess progress towards eliminating viral hepatitis.

Polaris Observatory models are updated annually. For this analysis, the researchers used data from 110 hepatitis C and 166 hepatitis B models. They also asked collaborators worldwide to complete surveys about national hepatitis B and C programs. Policy surveys, up to May 2022, were available for 61 countries.

The World Health Organization’s targets for hepatitis C elimination include:

According to the hepatitis C models, only 11 countries are on track to meet all HCV elimination targets by 2030: Australia, Canada, Denmark, Egypt, Finland, France, the country of Georgia, Japan, Norway, Spain and the United Kingdom. Another two dozen are expected to meet these targets between 2031 and 2050. But most countries, including the United States, Brazil, Mexico, China, India, Pakistan and many African countries—are unlikely to achieve hepatitis C elimination until after 2050.

Based on the surveys about HCV programs, 25 countries (42%) had governments with the strongest political will, meaning they were fully committed to eliminating hepatitis C. Thirty-three countries (54%) had the highest scores for financing their national hepatitis C programs.

Targets for hepatitis B elimination include:

The hepatitis B models showed that no country is on track to achieve all HBV targets by 2030 or by 2050. But more than 80 countries will reduce the prevalence of hepatitis B in children ages 5 and under—the age group covered by universal HBV vaccination programs—by 2030. The majority of these are high or middle-income countries, including the United States, Canada, most countries in Central and South America, Australia, China, most Western European countries and Russia. The researchers suggested that better access to and wider use of HBV vaccination at birth will aid in achieving this target.

Most lower-income countries in sub-Saharan Africa are unlikely to achieve hepatitis B targets—including the reduction in prevalence among children—until after 2050. However, some countries in East Africa, along with India and Pakistan and parts of Central Asia, will achieve the child prevalence target between 2031 and 2050.

“Vaccination campaigns for HBV have been successful in reducing HBV prevalence among children, but little progress has been made toward achieving other HBV elimination targets,” the researchers noted.

Based on the surveys about HBV programs, 17 countries (30%) had governments with the strongest political will to eliminate hepatitis B, and 30 countries (51%) had top scores for financing their national hepatitis B programs.

“As countries progress toward eliminating HCV and HBV, more work is needed to enhance political will and financing of national elimination programs,” the researchers concluded.