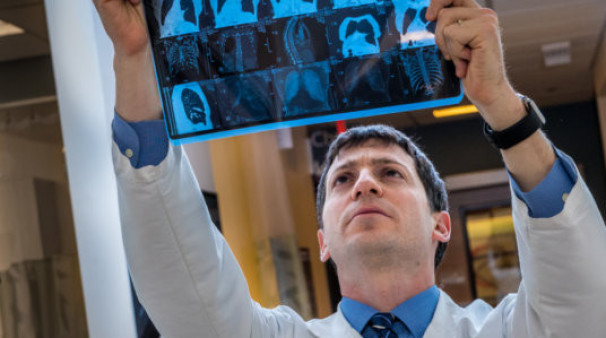 “Curative Potential” of a Combination Therapy for Some Leukemia Patients

The combination of chemoimmunotherapy with a targeted drug represents a step toward a new standard of care for people with chronic lymphocytic leukemia (CLL).

The phase 2 clinical trial results are so favorable that they represent a step toward “a new standard of care with curative potential for a broad population of younger, fit patients” with CLL, say the investigators, led by Matthew Davids, MD, MMSc, and Jennifer Brown, MD, PhD. “Younger” in this setting is 65 years of age or below.

The report in The Lancet Haematology describes the regimen administered to 85 patients with CLL whose median age was 55 years. The study looked at individuals whose cancer carried a mutated IGHV gene — which confers a higher likelihood of a long-lasting response to chemotherapy — and those with an unmutated IGHV gene — who rarely have durable responsesto chemotherapy.

The study examined the combined effect of two different treatment options for CLL patients. The first, chemoimmunotherapy consisting of fludarabine, cyclophosphamide, and rituximab (FCR), can improve overall survival for younger fit patients with CLL who have an IGHV mutation. The second, the targeted drug ibrutinib, can be effective for CLL patients irrespective of their IGHV status, but requires continuous treatment. The clinical trial examined if FCR plus time-limited ibrutinib could achieve long-lasting responses in younger, fit patients with either mutational status.

The patients, who were previously untreated, received oral ibrutinib for seven days, then up to six 28-day cycles of FCR along with continuous ibrutinib. Responders continued on maintenance ibrutinib for up to two years, and those who had undetectable MRD in bone marrow after two years were able to stop treatment.

Thirty-three percent of patients achieved the primary endpoint — a complete response with undetectable minimal residual disease in bone marrow two months after the last cycle of ibrutinib plus FCR. A best response of undetectable minimal residual disease in bone marrow was achieved by 84 percent of patients at any time during the study. “Many of the patients had deepening responses while on the two years of ibrutinib maintenance, so later converted to undetectable MRD,” explains Davids.

The researchers say the results of the trial demonstrated that the combination of chemotherapy and two years of ibrutinib maintenance leads “to the best of our knowledge, to the highest proportion of patients achieving undetectable minimal residual disease in the bone marrow ever published for any regimen used to treat this disease.” The approach, they add, could increase the potential to “functionally cure patients with mutated IGHV and, importantly, might for the first time extend this potential to patients with unmutated IGHV.”

This article was originally published on August 26, 2019, by Dana-Farber Cancer Institute. It is republished with permission.