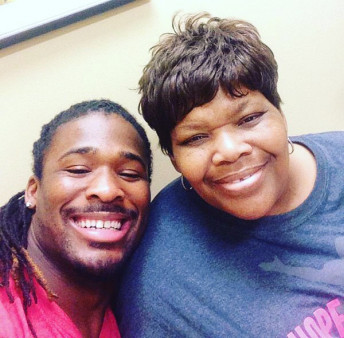 His mother died of breast cancer five years ago.

In 2014, former Pittsburgh Steelers running back DeAngelo Williams lost his mother, Sandra Hill, to breast cancer. To honor her, Williams has covered the cost of more than 500 mammograms at hospitals in the United States through his foundation, Today reports.

Hill died of cancer at age 53. A year after her death, Williams began sponsoring mammograms for 53 women through the “53 Strong for Sandra” program, which has helped women with little or no insurance in four cities: Pittsburgh; Memphis; Jonesboro, Arkansas; and Charlotte, North Carolina.

“To be able to help these women is amazing,” Williams recently told Today. “This can be life-changing for these women. We are enabling them to get this care that no one should ever be denied or not have access to.”

Founded in 2006, The DeAngelo Williams Foundation works to “develop and seek initiatives to support the eradication of breast cancer through preventative care and research,” according to its website.

In 2009, Williams pushed the NFL to allow players to wear pink cleats during October, which is Breast Cancer Awareness Month. In 2015, he asked the NFL to allow him to wear pink on his uniform all year but was denied. In 2016, Williams was featured in the NFL’s “Crucial Catch” campaign, which it launched in 2009 in partnership with the American Cancer Society (ACS) as part of October’s Breast Cancer Awareness Month.

The NFL has since expanded that campaign to “address multiple types of cancer through early detection and risk reduction.” Recently, former Kansas City Chiefs safety Eric Berry appeared in the NFL’s commercial for the campaign, according to The Kansas City Star. Berry, a free agent, was diagnosed with Hodgkin lymphoma in 2014; nine months later, thanks to early detection, he was back on the field, which the NFL highlights in its new ad. (You can view it below.)

Even an All-Pro safety can get cancer.
Early detection saved Eric Berry’s life.

In addition, the NFL and ACS have teamed up to develop a free digital assessment tool that helps individuals better understand and reduce their cancer risk. The Defender gives users “personalized, quick and informative recommendations on how they can take action and adapt their lifestyles to reduce their risk of cancer.”

For related coverage, “Tom Brady’s Mom Attends Super Bowl Cancer-Free” and “NFL’s James Conner Was Told ‘You Got About a Week’ After Cancer Diagnosis.”