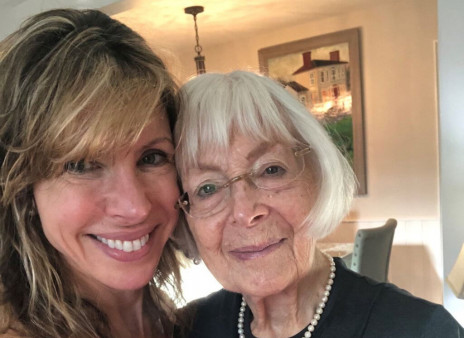 The force, the caring, the solidarity, and the compassion of the women in my support group have stayed with me.

I was a 74-year-old pediatrician in practice with a multi-specialty group associated with Boston Children’s Hospital. Forty years after becoming a doctor, I still loved learning new things and sharing them with my patients. Then I was diagnosed with ovarian cancer — and suddenly, a big wall separated me from the people who had filled my days.

My diagnosis came by chance, during a very difficult time. I had postponed my yearly check-up with my gynecologist because I had been busy with work and helping care for my ex-husband, whose health was declining. After he died, I was visited our daughter, Odile, in New York City. Sharing a futon with her cat, I woke up screaming in pain one night when it walked over my belly. The next morning, I examined my abdomen and noticed something hard that was not supposed to be there.

Back in Boston I finally went to my gynecologist, and learned I had an ovarian tumor. The tumor was big enough to push my uterus up; this was the hardness I had felt. My first thought when I entered the ultrasound he ordered was that it was nine in the morning and I had more than 20 of my own patients scheduled for that day. The procedure confirmed my doctor’s suspicions: I had stage I ovarian cancer. The only good news was that the tumor’s swelling had led to an early diagnosis.

My operation took place without delay at Brigham and Women’s Hospital, which I was familiar with since I had worked there for 31 years. The tumor was removed, but the cancer cells that may have spilled in my abdomen during the surgery were the most aggressive kind. Chemotherapy was mandatory.

Cancer was not new in my family. I lost my 32-year-old mother to pancreatic cancer when I was 12, and I had been the caretaker for a cousin during her cancer treatment decades before. I considered myself fortunate because I had led a full life, and initially refused to undergo chemotherapy. But Odile insisted I see the oncologist my gynecologist had recommended: Ursula Matulonis, MD, chief of the Division of Gynecologic Oncology in the Susan F. Smith Center for Women’s Cancers at Dana-Farber.

I can still remember my first visit with Dr. Matulonis: the room, the corridors, the bright light of the sun that filtered through the windows, and my fears. I was prepared to give my reasons for not having chemotherapy. To my surprise, when I left an hour and a half later, I had agreed to the treatments. Dr. Matulonis’ words — “we are going to beat this cancer” — still remain in my ears, and her friendly face is always with me. The vision of her encouraging me still brings me to tears.

Odile came from New York to Boston for each chemotherapy session, committed in her role as my caregiver. Dana-Farber suggests activities to help patients deal with their diagnosis and recovery, and I chose writing. I knew the comforting effect it can provide, and I decided to continue writing a memoir I had started. Whether alone or with a nurse’s aide in the apartment, my computer was my main support. I wrote every day, sometimes at three in the morning.

The IV nurses who cared for me were angels. The side effects of the chemotherapy were hard to endure, and I was unable to perform any activity for a long time. I had always considered get-well cards an American mania, but now they were my link to my patients. The children’s drawings made me smile all day.

Someone recommended me to a support group, and it became the central activity in my life: my peers, my role models, my survival. The force, the caring, the solidarity, and the compassion of these women — all of them also undergoing chemotherapy — has stayed with me. So have memories of the relaxation exercises I attended through the Leonard P. Zakim Center for Integrative Therapies and Healthy Living at Dana-Farber. They took place in a large room, with carpeting that featured an outline of a labyrinth. When I hesitantly began to walk and follow its path, I found myself forgetting my anxieties.

In time, I began to realize that I might not be able to return to my profession. I considered other possibilities that might fulfill my need for a goal in my life and began volunteering at a local art museum in Boston. This was an appropriate step toward my current role as an accessibility volunteer at the Metropolitan Museum of Art in New York.

Fifteen years post-diagnosis, my cancer is in complete remission; I no longer need to see Dr. Matulonis even for annual checkups. Living near Odile and her family, I once again have an active social life and happily greet life every day. I am ready to deal with what it brings.

This article was originally published on May 30, 2019, by Dana-Farber Cancer Institute. It is republished with permission.

She Needed a Stem Cell Transplant for Acute Myeloid Leukemia, But COVID-19 Interfered