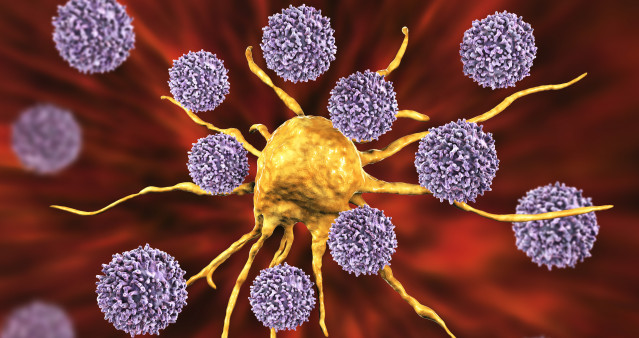 Tecartus led to durable remission in a majority of participants in a Phase II study.

On July 24, the Food and Drug Administration (FDA) granted accelerated approval of a new CAR-T therapy, Tecartus (brexucabtagene autoleucel), for adults with mantle cell lymphoma who have not responded to or who have relapsed after other kinds of treatment.

Tecartus (formerly known as KTE-X19), manufactured by Kite, a Gilead Company, is a “living drug” that reprograms a patient’s own T cells to fight cancer. About two thirds of participants treated in the ZUMA-2 study experienced complete remission, which in a majority of cases lasted at least a year.

"This approval is yet another example of customized treatments that use a patient’s own immune system to help fight cancer,” Peter Marks, MD, PhD, director of the FDA’s Center for Biologics Evaluation and Research, said in a press release. “We’re seeing continued advances in the field of gene therapy and remain committed to supporting innovation in this promising new area of medicine.”

Mantle cell lymphoma (MCL) is an uncommon form of non-Hodgkin lymphoma that involves overgrowth of abnormal B cells in lymph nodes. By the time it is diagnosed, MCL has often spread to the bone marrow and other organs, and it is frequently refractory (nonresponsive) to existing treatments or relapses following a period of remission.

Chimeric antigen receptor T-cell therapy—better known as CAR-T—involves removing a sample of a patient’s white blood cells, genetically reprogramming the T cells to recognize and attack their cancer, manufacturing a large number of the modified cells in a laboratory and infusing them back into the body. Like Kite’s previously approved CAR-T Yescarta (axicabtagene ciloleucel), Tecartus targets the CD19 protein on B cells, but the manufacturing process includes greater T-cell selection and lymphocyte enrichment.

The Phase II ZUMA-2 trial enrolled 74 adults with relapsed or refractory MCL in the United States and Europe who had previously tried up to five prior therapies. Six people ended up not receiving Tecartus because of manufacturing failures or death due to disease progression.

The primary analysis included 60 treated participants. Most were men, and the median age was 65. Most had Stage IV metastatic cancer, more than 80% had tried three or more prior treatments and 43% had received a bone marrow stem cell transplant.

A sample of the patients’ T cells were collected and modified, and they received strong conditioning chemotherapy to kill off some of their existing immune cells to make room for the new ones. They then received a single infusion of the genetically engineered cells.

As described at last year’s American Society of Hematology Annual Meeting and in The New England Journal of Medicine, the overall response rate, meaning complete or partial remission, was 93%, including 67% with complete responses. After a year of follow-up, 57% were still in remission, as were 43% of those followed for two years. The estimated one-year progression-free survival rate was 61%, and the estimated overall survival rate was 83%.

Therapies that receive FDA accelerated approval based on overall response rates are expected to undergo further testing in larger trials to confirm clinical benefits, and the agency can rescind approval if they do not measure up. Tecartus is also currently in Phase I/II trials for acute lymphoblastic leukemia and chronic lymphocytic leukemia.

Treatment with Tecartus was generally safe. The most common severe adverse events were low blood cell counts due to the conditioning chemotherapy and infections. Introducing engineered T cells can trigger a strong immune reaction known as cytokine release syndrome (CRS), which can lead to falling blood pressure and organ failure. As previously reported, 15% of study participants experienced Grade 3 or higher CRS, and 31% developed severe neurological side effects. Based on a larger group of patients, Gilead/Kite updated these figures to 18% and 37%, respectively. These side effects were managed with corticosteroids or Actemra (tocilizumab), and none were fatal.

A risk evaluation and mitigation strategy (REMS) for Tecartus has been approved by the FDA and combined with the Yescarta REMS (www.YescartaTecartusREMS.com). This program informs health care professionals about the risks associated with CAR-T therapy and how to manage it.

Tecartus will be produced at Kite’s commercial manufacturing facility in El Segundo, California. The median turnaround time from T-cell collection to administration of the modified cells is around 15 days, according to the press release. The Kite Konnect program offers financial and logistical support for eligible patients receiving Tecartus or Yescarta.

“Despite promising advances, there are still major gaps in treatment for patients with MCL who progress following initial therapy,” ZUMA-2 lead investigator Michael Wang, MD, of University of Texas MD Anderson Cancer Center, said in the press release. “Many patients have high-risk disease and are more likely to keep progressing, even after subsequent treatments. The availability of Tecartus as the first-ever cell therapy for patients with relapsed/refractory MCL provides an important option with a response rate of nearly 90% and early clinical evidence suggesting durable remissions in later lines of therapy.”